450SX leader could wrap series up with a round to spare on Wednesday. 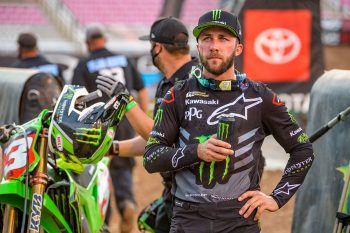 Runaway Monster Energy Supercross championship leader Eli Tomac is in position to capture the 2020 crown with a round to spare tomorrow in Salt Lake City.

The 27-year-old is on track to win his first 450SX title with Monster Energy Kawasaki and intends to seal it if he’s in position to win on Wednesday.

Tomac currently has a 24-point lead over Ken Roczen (Team Honda HRC) and another point over Cooper Webb (Red Bull KTM) with two rounds remaining. Victory tomorrow will be enough to take the championship, which is part of his game-plan at this point.

After entering the seven races in Utah with a slim three-point buffer, Tomac has taken two wins and consistent podiums to set himself up for a shot at the title in SLC6 – potentially his first championship since stepping up to the premier class in 2014.

“I think I’m in a good spot right now,” he added. “I’m still in a position to where if I go perform good next week and win, I can control my own destiny that way. So yeah, I’m happy right now. That’s really all I have to say – I’m in a good spot, I think.”