Assorted racer comments following the 15th round of the season.

In Quotebook, a selection of riders detail round 15 of the 2020 Monster Energy Supercross, an FIM World Championship, at Salt Lake City. 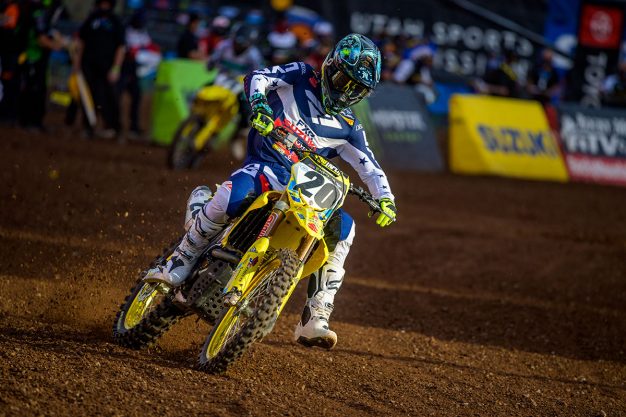 Cooper Webb (Red Bull KTM Factory Racing) – Second:
The holeshot was huge tonight. Kenny was riding well and I knew he was a little faster, so when he got by me I was just going to try to pace him. I made a charge at the end, but we were so close in times, it’s hard to make those chunks up. The track was definitely tough – it had a lot of flat turns, which was a little different than what we’re used to. We’ll come back in a few days and try to get the top step.

Jason Anderson (Rockstar Energy Husqvarna Factory Racing) – DNF:
In the main event I ripped a good start and I went into the second corner in second and then it kind of turned into a crazy night. It sucks I wasn’t able to finish but at the same time there’s a lot of positives to take away from how I was riding, my starts and stuff like that. I’m just going to look forward and try to prepare for the last two rounds and end on a good note.

Zach Osborne (Rockstar Energy Husqvarna Factory Racing) – Fourth:
I came home with a fourth, it’s a decent result but after the last few weeks I want more. I do have to keep things in perspective and know that at the beginning of the season I would have given anything for a string of results like this. So all in all, I’m happy but still striving for more.

Dean Wilson (Rockstar Energy Husqvarna Factory Racing) – Sixth:
I feel like my pace was decent through the whole main and I think a few different line choices would have helped me throughout the race. I think I had a couple bad lines after watching it and that kind of held me up a little bit, but other than that, I can’t get too frustrated. I gave it my best and that’s all you can do.

Justin Barcia (Monster Energy Yamaha Factory Racing) – Ninth:
I had a solid ride in the heat race in third – it was the best I’ve ridden in a while. In the main event, I came out inside the top 10 and was riding really good. I feel like tonight would’ve been a top five finish, it just didn’t work out that way. I went into one of the ruts before the mechanic’s area and unfortunately that was like the only soft spot on the track. The rut caved in, my front wheel hit it and I ended up falling. I went all the way back to 16th and charged back to ninth. The result really doesn’t show the way I rode today and the progress that we’ve made on the bike, so that was definitely a little disappointing, but I think overall that’s the best day I’ve ridden and the best I’ve felt on the bike. We just have to take the positives going into these next two races and try to keep it on two wheels, and just keep moving forward.

Aaron Plessinger (Monster Energy Yamaha Factory Racing) – 10th:
I think today was pretty good, all in all. I got off to a really bad start in the main. I really have to figure that out – I have got to get the jump on those guys and just bulldog my way to the front. I was riding really good though and made my way back up to seventh. At about five minutes to go, I started struggling in the whoops quite a bit. The whoops were really slick, one side of them was cupped out and the middle was really slick. I just kind of tightened up in the last few laps and Brayton got by me, [Blake] Baggett got by me and then Justin got by me. So yeah, I was a little frustrated with the way I rode in the last five minutes, but I have to take the positives out of it and move forward. Come Wednesday, I will try and get a better start and just ride the whole race as hard as I can. I’m looking forward to the next one and hopefully we can get off the line and break into the top five.

Eli Tomac (Monster Energy Kawasaki) – Third:
Overall it was a good race. I felt good and got in the groove up until halfway and then I got a little squirrelly in the whoops. I tried pushing it for a while and realized it wasn’t worth it to go too wild and I know I need to reserve some of the energy for these last two rounds. It’s not a win, but I’m happy with the result because we’re thinking about the bigger picture.

Ken Roczen (Team Honda HRC) – First:
Tonight we did really, really good. I felt like I was able to go the full distance in the main, which was great. I knew it was just going to take a few extra days to get everything back lined up after the last couple of rounds and everything that’s been going on with my body. We won our heat race, which was really stacked – I got a holeshot there and it was great. I really felt good with the bike, we’ve been tweaking it a little bit here and there and I was really gelling with it nicely tonight. I kind of liked the track, the whoops got really chewed up again and I think that was one of my strong points tonight. We ended up getting the win, which was great because the last three rounds have been really tough on me and the team. It was good to come back and turn all that negativity around into something positive. Every time I go out and win for myself and my team, it feels like my first win back. We were the best tonight, which is awesome. The team is happy and I’m happy and looking forward to the race on Wednesday.

Justin Brayton (Team Honda HRC) – Eighth:
I’m proud of that one, that was pretty good. I didn’t get the greatest of starts, but I made some good passes early. There was just a train of us – like six, seven, eight, nine guys – and I ended up eighth. I felt pretty good about my riding and my effort, the bike was great. I’d have loved a little better track position at the beginning of the race to play into my strength, which was whoops – I felt really good in the whoops all day. Overall, I’m fairly happy with it – not super-stoked on the position, but my effort, the bike and the way I was riding were really good. I’m stoked on that and super-stoked on the team getting a win with Ken. It’s awesome and everybody here deserves it.

Broc Tickle (JGRMX Yoshimura Suzuki) – 12th:
Overall it was a better day on the track today. We made some changes in the right direction to give me more comfort on the bike. In the LCQ it was good to get a holeshot and get some more laps on the track. Dylan Ferrandis (Monster Energy Star Yamaha Racing) – Second:
It was a bad night for me. I got the holeshot from the outside in the main, which was good, but I made a small mistake and missed a rhythm when I saw a yellow flag and Forkner got me after that. I lost some important points for the championship tonight. We have a few days off from racing now before the last round next Sunday and will keep working.

Justin Cooper (Monster Energy Star Yamaha Racing) – Sixth:
I got a terrible start in the main, which really hurt me. It made it really tough to come through the pack and I was just not aggressive enough to get by the people that I needed to in the early laps. I can’t expect to be up front battling when I start outside the top 10. We have one more go next Sunday, I’ll come back try and to finish out strong.

Austin Forkner (Monster Energy Pro Circuit Kawasaki) – First:
I felt really good today. That was one of my best supercross races I’ve ever raced. My speed was good, the track was set up for us to easily make a mistake and it was slick in some areas, but I was patient and waited to make a move for the lead. I’m really happy about that ride and even happier about earning a few more points. We’re proving that we’re still in this race and how badly we want it.

Cameron McAdoo (Monster Energy Pro Circuit Kawasaki) – Fourth:
I had a good day today and feel like I rode a solid main event. I made a few mistakes that the team and I will go back and focus on so we’re ready for next Sunday, but overall, I’m just happy to be healthy and racing up front where I belong. I can’t thank the entire Monster Energy Pro Circuit Kawasaki team enough for their hard work and support this year and I’m looking forward to finishing out the season strong.

Hunter Lawrence (Geico Honda) – Seventh:
I was pretty pumped that there was whoops out of a turn, which I’m pretty happy about. They came into favor. I made a lot of my passes through there. I was really gelling with the track. It’s definitely been a rough path to get to where we are now – I got a little emotional after going over the line. Everything went through my head, all the hard times we had in Europe. Eating two-minute noodles in Australia just trying to survive really. It definitely feels good to be finally here and with such a great team.

Jett Lawrence (Geico Honda) – Third:
It was better, but the result didn’t even reflect the progress we made. The team and I changed some things on the bike, which really helped out, and a better heat race put us in a better position for the main, so that was a big factor. I felt good in the main, two mistakes cost me positions. I’m having fun out here in Utah, really looking forward to going downhill mountain biking this week to freshen up for one more race on Sunday!

Christian Craig (Geico Honda) – 10th:
Not much to say, besides I’m at a loss for words. I felt great. I qualified in a good spot and rode well in my heat to win. I made mistake after mistake in the main and was on the ground twice – I had a podium right there and lost it. Not sure what’s going on with me in the mains, but I’ll figure it out.

Michael Mosiman (Rockstar Energy Husqvarna Factory Racing) – Fifth:
It was a tough day. I got into some lapped traffic in the main event and made some mistakes that really set me back. I’m disappointed that I had a podium finish going and to have that taken away but I’m fired up for the last round!

Alex Martin (JGRMX Yoshimura Suzuki) – DNF:
I qualified better in practice and my intensity was coming around. My heat race was good with a strong finish. I’m very frustrated with the main, but also motivated to end the series on a high note next weekend.