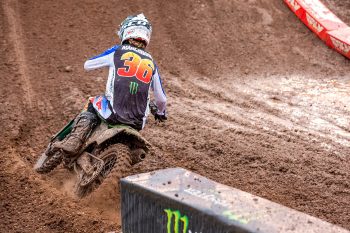 The 18-year-old crashed out of round 13 with a bruised lung and additional internal injuries, but still sits third in the standings.

“After crashing at round 13, Monster Energy Pro Circuit Kawasaki rider Garrett Marchbanks and the team have decided to concentrate on his recovery process and forgo the remainder of the Supercross season,” a statement read.

“Marchbanks suffered a bruised lung and other internal injuries. The Utah native is looking ahead to a full recovery and the start of the AMA Pro Motocross Championship.”

Despite sitting out the final two rounds, Marchbanks is still in a position to remain third in the standings. He is currently 14 points ahead of Jeremy Martin, who will sit out, and an additional 14 in front of Jalek Swoll in P5.