Supercross title rivals come together off the start on Sunday. 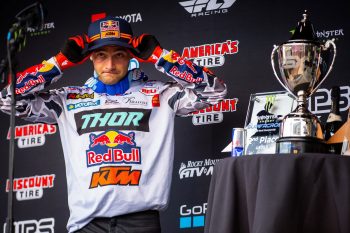 On his way to the hole-shot in the 450SX main event, the rear-end of Webb’s Red Bull KTM rubbed Tomac’s front wheel, almost causing the latter to fall.

It appeared to a number of onlookers that Webb had purposely made the move in a bid to increase his title chances with just two rounds remaining, however, the 2019 championship winner said that he wasn’t aware it was Tomac who he touched with.

“I didn’t even know that…” Webb stated. “No, I mean, I was coming in hot, I knew someone was on my outside and I was just trying to kinda keep my line and then those bails seemed to come up quick, so I had to hit the brakes. I felt like I hit somebody, but I didn’t know who it was.”

Tomac, who will carry a 24-point lead into Wednesday’s penultimate round, didn’t have much to say on the near-miss afterwards: “It was close there, so, I don’t know – first turns are always chaos.”

Webb has proven the class of the premier category since Supercross arrived in Salt Lake City for the final seven rounds, finishing no worse than second position and collecting two wins to date. He’s currently third in points behind Tomac and Sunday winner Ken Roczen (Team Honda HRC).