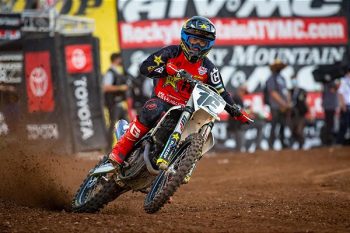 The 2020 AMA Supercross World Championship Series continued its jam-packed schedule on Sunday with Round 15 of the 17-race series and the Rockstar Energy Husqvarna Factory Racing Team put forth another solid performance inside Rice-Eccles Stadium. In the 450SX class, Zach Osborne continued his streak of top-five finishes with fourth-place, while his teammate, Michael Mosiman, battled through adversity to claim a top-five finish in the 250SX West Main Event.

Osborne, who was forced to sit out a couple rounds this season, came back from injury at the start of the seven-race stint in Utah and he’s proven to be one of the most consistent riders up front with 5-3-4-2-4 finishes through the last five rounds. Osborne got a sixth-place start in 450SX Heat 1 and he got shuffled back to eighth after taking a rock to the face early on. He battled his way back to ultimately finish fifth in the heat. In the Main Event, Osborne got off to a great start, where he settled into third early on. He mixed it up inside the top-five for the rest of the race, ultimately securing fourth late in the race.

“I came home with a fourth, it’s a decent result but after the last few weeks I want more,” Osborne said. “I do have to keep things in perspective and know that at the beginning of the season I would have given anything for a string of results like this. So all-in-all, I’m happy but still striving for more.”

Dean Wilson once again had a great day of qualifying, where he laid down the fastest time in the first session and fourth overall in the combined. He grabbed a top-five start in 450SX Heat 1 and quickly moved into third by the second lap. The race leader went down with two laps to go and Wilson jumped into a head-to-head battle for the lead, just missing the heat-race win by a mere 1.151 seconds. In the Main Event, Wilson had an eighth-place start and he worked his way into sixth early on. He battled just outside the top-five for most of the race, ultimately securing sixth for the day.

“I feel like my pace was decent through the whole Main and I think a few different line choices would have helped me throughout the race,” Wilson said. “I think I had a couple bad lines after watching it and that kind of held me up a little bit. But other than that, I can’t get too frustrated. I gave it my best and that’s all you can do.”

Anderson had a great run in qualifying as he laid down the third fastest qualifying time in the 450SX class. He got off to a fourth-place start in 450SX Heat 2 and battled back-and-forth to ultimately claim the fourth-place transfer into the Main Event. In the Main, Anderson got a good jump off the line as he raced to the first turn up front. However, he got pushed off the track and went down hard on the opening lap, where he was forced to begin the race in dead last. As he was working his way through the field, Anderson encountered some more bad luck when he got caught in a multi-rider pileup and went down again. After spending substantial time getting his bike untangled from another rider’s, Anderson was unable to finish the Main Event.

“In the Main Event, I ripped a good start and I went into the second corner in second, and then it kind of turned into a crazy night,” Anderson said. “It sucks I wasn’t able to finish but at the same time there’s a lot of positives to take away from how I was riding, and my starts, and stuff like that. I’m just going to look forward and try to prepare for the last two rounds and end on a good note.”

Michael Mosiman had a tough start to the day as he experienced a big get-off during the first qualifying session but he was able to regroup and secure a top-five qualifying position overall. In 250SX Heat 2, Mosiman got caught in some early congestion off the start and he began in ninth. He battled his way through the field to capture a sixth-place transfer into the Main Event. In the Main, Mosiman got a sixth-place start and he moved into the top-five by lap two. He overtook fourth on lap nine and from there he got into a three-way battle for the final podium position. He held third for about four laps until he got shuffled back to fifth, where he ultimately finished. Mosiman now sits fifth overall in the 250SX Western Regional Championship.

“It was a tough day,” Mosiman said. “I got into some lapped traffic in the Main Event and made some mistakes that really set me back. I’m disappointed that I had a podium finish going and to have that taken away but I’m fired up for the last round!”