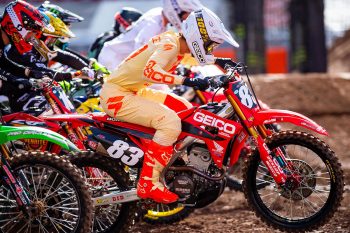 The potential of 16-year-year old prospect Jett Lawrence delivered in the professional results sheet on Sunday night, as the Australian delivered a 250SX West podium finish in his fifth career supercross start. Lawrence grabbed third despite starting outside of the top ten. He admitted to some tears after the race, and uttered that he was “happy to be alive” in his television interview on NBCSN.

“I was just too excited. Those were just words coming out of my mouth, really,” explained Lawrence. “I didn’t know what I was saying. I was just happy to be alive and to be experiencing that. I bet you no other sixteen-year-old is getting to do what I’m doing, traveling a world and getting to race with some of the fastest guys in the world.”

Lawrence steadily worked his way forward throughout the race, eventually winning a duel with Cameron McAdoo and Michael Mosiman to get to third.

“I was pretty pumped that there was whoops out of a turn, which I’m pretty happy about,” said Lawrence. “They came into favor. I made a lot of my passes through there. I was really gelling with the track”

“It’s definitely been a rough path to get to where we are now,” Lawrence continued. “I got a little emotional after going over the line. Everything went through my head, all the hard times we had in Europe. Eating two-minute noodles in Australia just trying to survive really. It definitely feels good to be finally here and with such a great team.”

The Lawrence family had more to celebrate, because older brother Hunter made big gains in his second supercross start, netting a solid seventh. He took 13th at his debut five days earlier.

“It was better but the result didn’t even reflect the progress we made,” said Hunter Lawrence. “The team and I changed some things on the bike which really helped out, and a better heat race put us in a better position for the main so that was a big factor. I felt good in the main, two mistakes cost me positions. I’m having fun out here in Utah, really looking forward to going downhill mountain biking this week to freshen up for one more race on Sunday!”

With injuries to other riders thinning the field in 250SX West, Hunter Lawrence is expected to be eligible to race the season-finale East/West Showdown next Sunday in Salt Lake City.

Christian Craig battled back to a tenth-place finish, but that was disappointing since the Californian started up front and ran a solid third early until crashes sent him way back. He also won his heat race for the second-straight event.

“Not much to say besides I’m at a loss for words,” said Craig. “I felt great. I qualified in a good spot and rode well in my heat to win. I made mistake after mistake in the main and was on the ground twice. I had a podium right there and lost it. Not sure what’s going on with me in the mains but I’ll figure it out.”

Two races remain in the 2020 Monster Energy Supercross campaign. The 250SX East division will race this Wednesday, with Chase Sexton and Jo Shimoda back in action. Sexton holds a three-point lead in 250SX East, hoping to collect his second-straight championship. The East/West Showdown looms this Sunday, with riders from both regions on track together for the only time this season.