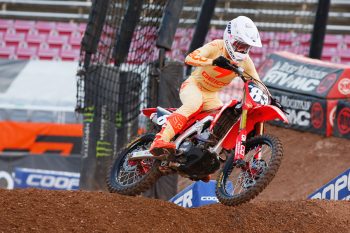 In only his fifth Supercross appearance – he missed three races after crashing out of Anaheim 2 – Lawrence managed to put a main event together and realise his podium potential despite starting outside of the top 10 in Salt Lake City tonight.

“Obviously, I had a terrible start,” Lawrence reflected. “I was pretty pumped that there were whoops out of a turn, which I’m pretty happy about. They came into favour, I made a lot of my passes through there and I really gelled with the track.

“It took me a while to pass [Hunter] because he’s my brother and I don’t want to pass him dirty, but definitely, it’s cool to kind of see another Lawrence out there, that’s for sure. It was definitely a bit of a struggle to get around him.

“I didn’t even know that I came from outside of the top 10 to third, so that’s pretty cool. It definitely feels good to get this P3, I feel like I’ve earned it from coming outside of the 10. It’s been a rough path to get to where we are now – I got a little emotional after I went over the line.

“Everything went through my head, all the hard times we had in Europe, eating two-minute noodles in Australia just trying to survive, really. It feels good to be finally here and to be with such a great team – Geico Honda is more like a family to us. They’re all so good to us.”

With 250SX East returning this Wednesday, Lawrence will be back on track next Sunday for the Monster Energy Supercross 250SX Showdown, where both regional championships will be decided.