Assorted racer comments following the 14th round of the season.

In Quotebook, a selection of riders detail round 14 of the 2020 Monster Energy Supercross, an FIM World Championship, at Salt Lake City. 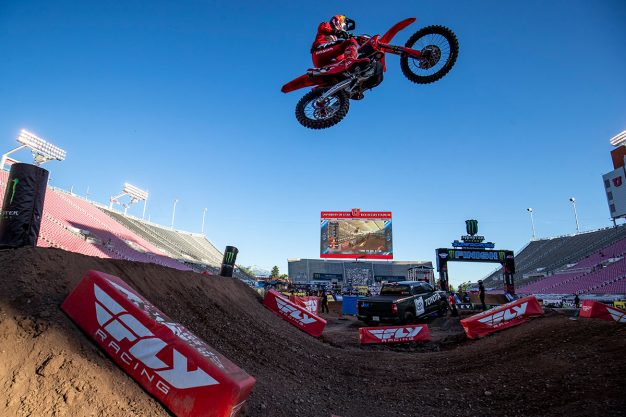 Cooper Webb (Red Bull KTM Factory Racing) – First:
It was a great race, I almost got the holeshot and led every lap, which is the first time I’ve been able to do that this year. Kenny was riding really well at the beginning. I made a few mistakes and we battled there for a second, but I regained focus and I was able to ride my laps and ended up getting a decent lead, which is nice. I feel like the first three [rounds] we’ve been battling down to the last lap so it was cool to be able to enjoy that one a little bit more, not so stressful.

Jason Anderson (Rockstar Energy Husqvarna Factory Racing) – Seventh:
I felt really good in my heat race, I was riding really good and ready for the main event. My start in the main was actually a good start, but I just got shuffled back and then I ended up falling. It wasn’t the best finish, but I worked my way back up to seventh and I’m just looking ahead to the next round.

Zach Osborne (Rockstar Energy Husqvarna Factory Racing) – Second:
I feel like we’re building some momentum here. I’ve been enjoying this Salt Lake trip and I feel like I’m in a good headspace, which is good. I managed two good starts tonight and was able to come away with my second podium of the stretch here. I really felt like I was in a good position tonight and we had a good result so I’m pretty happy with it.

Dean Wilson (Rockstar Energy Husqvarna Factory Racing) – Eighth:
Qualifying was pretty good, it has been recently. In the main I had a really bad start and I just made slow passes, coming from 17th up to eighth. It’s not a great result, but the good thing is we get to try again on Sunday. I just really need to work on my starts and I think we can be in the top five.

Justin Barcia (Monster Energy Yamaha Factory Racing) – DNF:
I was having a pretty good day, better than it has been. Qualifying went alright, I was searching around a bit for sure, just trying to find that good flow. Aaron finished right behind me in the heat race, so it seemed like we were kind of starting to figure it out a little. In the main event I was battling pretty hard with a lot of the guys. I got a little sideways in the whoops and then it just kicked out too crazy and the bike went flying. I dinged myself up a little, but I’m alright and will be back on Sunday. Unfortunately my bike was broken after the crash and I wasn’t able to finish the race, so that was unfortunate, but will definitely get them on Sunday.

Aaron Plessinger (Monster Energy Yamaha Factory Racing) – Ninth:
The bike started off in a way better place today. I was very happy with what we did to improve the set-up. I was going through the whoops a lot better, it wasn’t kicking me around at all. The track definitely got rough for the main event and the sun was shining in our eyes in parts of the track and some parts were really dark. It also got pretty slick, but I just kept charging. I came across the first lap in 16th and ended up ninth. It was a better day for me. I broke the top 10. All we can do now is keep pushing forward.

Eli Tomac (Monster Energy Kawasaki) – Third:
I had to claw my way back once I was really buried off the start. I really need to work on getting better starts so I’m not challenged with tracking down all of these really fast guys in this class. I wasn’t sure if I would be able to catch up to a podium position, but I just kept charging. I’m happy with a third-place finish and glad to pick up a point toward the championship which is the goal. We’re going to stay focused and get ready for the next one.

Ken Roczen (Team Honda HRC) – Fifth:
Coming back after two days of trying to get everything lined up again following a tough race, I had a lot more fight and felt a lot better today. I had a good heat race and was able to put up a fight at least for some of the race. I’m not 100 percent yet obviously, because two days unfortunately is just not enough to get everything lined up, but it was much better than the last race. We’re going to just continue fighting because this stuff is out of our hands and we have the speed and good starts and everything. We have to get my body right and I think we can be on the top step much more consistently.

Justin Brayton (Team Honda HRC) – 12th:
It was my roughest one yet. I’m not really sure what went on, but today was just kind of a struggle most of the day. The best thing about this format is that we race again in a few days, so I’m going to try and forget about that one. Overall, I honestly can’t really pinpoint anything other than kind of a stomach bug for most of the day – I didn’t have the energy I needed for that main event. Definitely a bummer, but it’s all good and we’ll come back fighting in a few days.

Broc Tickle (JGRMX Yoshimura Suzuki) – 17th:
Today was a lot better than Sunday’s race for me, I felt better on the bike. I’m looking forward to making progress with my hand over the next couple days before Sunday and gaining some confidence during these last three rounds. Thanks to the whole JGR crew for all their hard work. 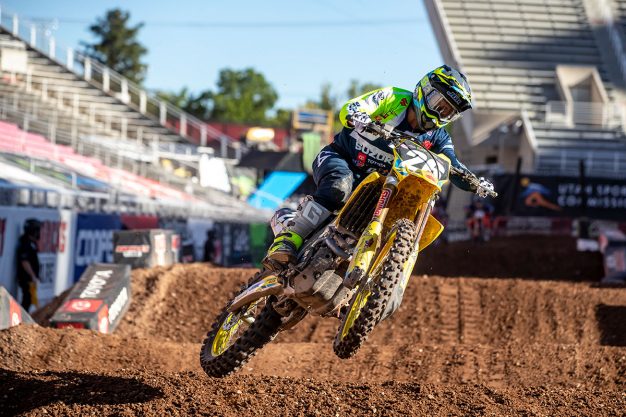 Dylan Ferrandis (Monster Energy Star Yamaha Racing) – Second:
It was a difficult day for me. I kind of struggled to set up the bike. We had too much power and I needed to try different things to get the bike the way I wanted. The crash in the heat race didn’t help too much and I got a bad gate pick in the main. I just put my head down and gave everything I had to finish second, which is not too bad in the big picture of the championship.

Justin Cooper (Monster Energy Star Yamaha Racing) – Fourth:
The conditions were very tough today. I need to rebound on Sunday to try and close the points gap. I’m definitely disappointed in my day, but we will regroup and I will come back ready and do better.

Austin Forkner (Monster Energy Pro Circuit Kawasaki) – First:
We’ve been working hard at the track during our break. To be honest, this is the hottest race we’ve had and you add in the altitude, it’s not easy. It was definitely the toughest race we’ve had all season. Which makes it that much sweeter. I think we learned a lot tonight that we can continue to build on for the race on Sunday.

Cameron McAdoo (Monster Energy Pro Circuit Kawasaki) – Third:
We worked really hard in the off time and it wasn’t always easy to keep it going when we didn’t know when we were coming back racing. But this is what it’s all about, seeing the hard work pay off. I’ve really tried to stay focused on knowing that the work I was doing would get me results and I’m really happy to be up on the podium.

Hunter Lawrence (Geico Honda) – 13th:
So good to be back at the races. At one point, I went six months with no riding due to back-to-back injuries. Being able to race these events is awesome and it was fun to dip my toes into Supercross for the first time. We had a few problems with the crashes, though. I think I was up to fifth in my heat race when I went down and then in the main I hit neutral when I was trying to avoid two guys stopped at the end of the whoops, had to come from last. Can’t wait to get more time under my belt and tidy a few things up so I can run up front!

Jett Lawrence (Geico Honda) – 11th:
The vibe was good, I felt really good the whole day and I was consistent in qualifying, around P3 and P2. Heat race, feeling good, made a mistake in the whoops and crashed. The whole main event I was struggling to find a flow. I had a really good start, I was a little off balance, but I kept it pinned – I even had one leg off just to get balance. I just struggled with lines and I wasn’t flowing. I was definitely disappointed with my performance. I wasn’t pushing much, I was in a comfortable spot, my heart rate wasn’t too high, I was feeling good, but the whoops just caught me and I crashed. At my level, being a professional, I shouldn’t be making those mistakes. I definitely wasn’t happy—what I got, I shouldn’t be getting.

Christian Craig (Geico Honda) – Eighth:
First race was a bit of a struggle for me. It wasn’t until the main event that I got my bike feeling comfortable. There’s so many different variables when you throw in the higher altitude, but I’m happy we got it better by the end of the night and I know the bike setup will be good the rest of the rounds here. In the main event I had a dumb tip-over, which left me second to last. I was able to work my way up to eighth and I felt really good actually. Despite the result, I’m happy with how I rode during the main and my fitness. It’s nice we get to go back racing in a few days!

Michael Mosiman (Rockstar Energy Husqvarna Factory Racing) – Fifth:
It’s good to be back to the races! It’s a stacked class right now with everyone healthy and it was pretty hectic out there today. Fifth on the day, I’m a little bit disappointed in my riding but I’m stoked that we get to race again soon and I’m looking forward to the next round.

Alex Martin (JGRMX Yoshimura Suzuki) – Sixth:
It felt awesome being back at the races again. I was frustrated with my riding in practice, but I managed to turn things around in the night show with great starts and stronger riding. I’m excited to build off a great ride in the Main and get that JGR Suzuki up front on Sunday.