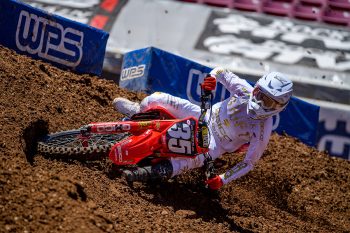 Lawrence returned from a series of untimely injuries to finally make his 250SX West debut in Utah on Wednesday, claiming 13th position.

The result could have been stronger if it weren’t for an early incident, forcing him to pick his way through the pack from last position in the opening laps. Regardless, he learned a lot and will have the opportunity to line up again this Sunday.

“So good to be back at the races,” the 20-year-old commented. “At one point, I went six months with no riding due to back-to-back injuries. Being able to race these events is awesome and it was fun to dip my toes into Supercross for the first time.

“We had a few problems with the crashes, though. I think I was up to fifth in my heat race when I went down and then in the main I hit neutral when I was trying to avoid two guys stopped at the end of the whoops, had to come from last. Can’t wait to get more time under my belt and tidy a few things up so I can run up front!”

It was an eventful maiden outing for the former grand prix regular and Pro Motocross front-runner, clashing with Austin Forkner (Monster Energy Pro Circuit Kawasaki) in practice and having to go through to the main via a win in the LCQ following his heat race troubles.

Lawrence will need a solid result this weekend if he is to qualify for the upcoming ‘Showdown’ round to complete the 250SX season, currently 26th in the championship standings and needing to climb the order further to secure his place.