Broken front-end the cause of non-finish on Wednesday. 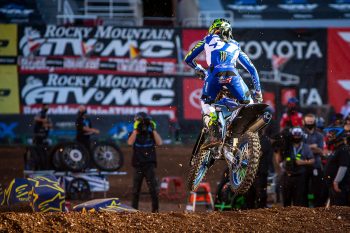 Barcia was fighting inside the top 10 when he went down in the whoops past the halfway point, forcing him out of contention with a broken front-end after impacting the stadium wall.

“I was having a pretty good day, better than it has been,” Barcia said. “Qualifying went alright, I was searching around a bit for sure, just trying to find that good flow.

“Aaron [Plessinger] finished right behind me in the heat race, so it seemed like we were kind of starting to figure it out a little. In the main event I was battling pretty hard with a lot of the guys. I got a little sideways in the whoops and then it just kicked out too crazy and the bike went flying.

“I dinged myself up a little, but I’m alright and will be back on Sunday. Unfortunately my bike was broken after the crash and I wasn’t able to finish the race, so that was unfortunate, but will definitely get them on Sunday.”

The incident of Barcia saw him slip to fifth in the Monster Energy Supercross standings, falling behind Jason Anderson (Rockstar Energy Husqvarna) with three rounds remaining.