Webb dominates in Salt Lake City for round 14 AMA Supercross 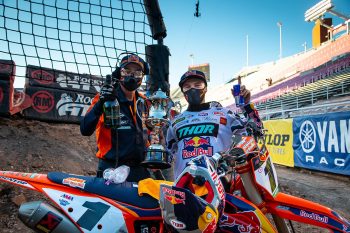 Webb’s nearly flawless performance vaulted the reigning Champion into second overall in the 450SX standings as he continues to fight for a second-straight title with three rounds remaining in Salt Lake City, Utah.

Despite a tough start to the season, Webb has been extremely consistent in the final stint with 2-1-2-1 Main Event finishes through the last four rounds. With that momentum, Webb came into Round 14 with plenty of steam as he topped the first 450SX qualifying session, ultimately claiming fourth overall in the combined times. In 450SX Heat 1, he powered his KTM 450 SX-F FACTORY EDITION into the lead on the opening lap and from there he never looked back, leading all nine laps of the heat race.

In the Main Event, Webb once again shot off the line to narrowly miss the holeshot but he quickly put himself into the lead on lap one. He held off a hard-charging Ken Roczen early on and the two riders diced back-and-forth for a lap until Webb fell into his groove and checked out for the remainder of the race.

Cooper Webb: “It was a great race, I almost got the holeshot and led every lap, which is the first time I’ve been able to do that this year. Kenny was riding really well at the beginning. I made a few mistakes and we battled there for a second but I regained focus and I was able to ride my laps and ended up getting a decent lead, which is nice. I feel like the first three [rounds] we’ve been battling down to the last lap so it was cool to be able to enjoy that one a little bit more, not so stressful.”