Tomac fights through the pack to finish third at SLC 4 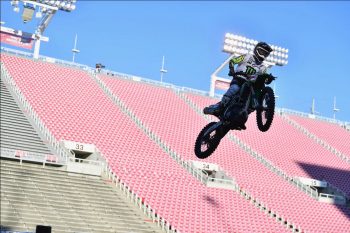 With only three rounds remaining in the Monster Energy AMA Supercross, an FIM World Championship, Monster Energy Kawasaki rider Eli Tomac added another point to his points lead on Wednesday night and continues to garnish his KX450 with the points leading red plate after his third-place finish in Round 14. The 250SX West Region returned to action with Monster Energy/Pro Circuit/Kawasaki riders making a statement as Austin Forkner claimed the top step of the podium and teammate Cameron McAdoo beside him with a third-place finish.

Tomac kicked the day off by qualifying with the third fastest lap time (45.088) and was quick to get comfortable on the track after the short turn-around from the previous Sunday. As the gate dropped on Heat 2, Tomac shot out of the gate in third and quickly made his move into second by Lap 3. With two laps to go, Tomac passed the leader and crossed the finish line with the heat race win.

Buried in the back of the pack off the start in the 450SX Main Event, Tomac was forced to fight his way through the field. Calm and collected, the points leader picked off riders and by halfway through the race, Tomac had made his way up to fifth but wasn’t done pushing forward. When others seemed to have reached their limit, Tomac continued to surge, passing most of the field right up to two laps remaining and crossing the finish line in third.

“I had to claw my way back once I was really buried off the start. I really need to work on getting better starts so I’m not challenged with tracking down all of these really fast guys in this class. I wasn’t sure if I would be able to catch up to a podium position, but I just kept charging. I’m happy with a third-place finish and glad to pick up a point toward the championship which is the goal. We’re going to stay focused and get ready for the next one.”