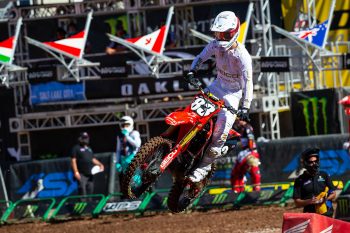 An 11th-place result in the 250SX West final didn’t meet the expectations of Jett Lawrence following a series of errors on Wednesday and already he is eyeing redemption when Monster Energy Supercross continues this weekend.

The highly-rated 16-year-old featured in the top three throughout practice and qualifying at at Rice-Eccles Stadium, but mistakes in the whoops during the heat and the main event ruined his chances of a stronger showing.

Lawrence challenged toward the front throughout round 15 of Supercross – the seventh stop on the 250SX West schedule – and was in a top five position during the main when he went down and dropped outside of the top 10. Still, it was a promising return to racing over four months after his spectacular near-win and crash at Anaheim 2.

“I was definitely disappointed with my performance, definitely not happy with that,” Lawrence reflected. “I knew I should have been up with [Justin] Cooper, [Dylan] Ferrandis and that. I made another stupid mistake that, at my level being a professional, I shouldn’t make. I wasn’t happy, but the team was still happy and I knew I could’ve done better. What I got, I shouldn’t be getting that position with the level I’m at now.”

The Geico Honda rookie said that he felt strong the entire day in what was his first 250SX outing lining up against elder brother and teammate Hunter, 20, however, a lack of flow in the final did affect his performance. Expect improvements when the gates drop for the penultimate western regional round this Sunday.

“I felt really good the whole day,” the Australian said. “Practice started off really good, I was consistent with that and I think I went P3 in practice and the two ‘quallies’. Heat race, feeling good and I ended up making a little mistake in the whoops that made me crash. Come the main event, really good start, I kind of slid underneath [Justin] Cooper and then I went into [Austin] Forkner, which got me a little bit off balance.

“But, yeah, that whole main event I was struggling, trying to find a flow. I wasn’t pushing much, I was in a pretty comfortable… my rate rate wasn’t too high and I was feeling good. Just the whoops caught me off-guard – I came in, I ended up going to the left and my bike went right, so we ended up going to the right. Besides that, I was happy with how the day started off, we just need to keep going with that.”