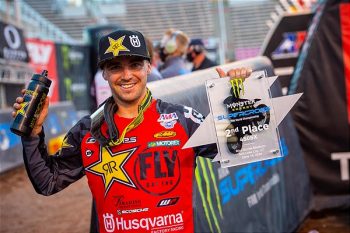 The 2020 AMA Supercross World Championship Series continues to roll on as Round 14 took place on Wednesday for the fourth time inside Rice-Eccles Stadium. Rockstar Energy Husqvarna Factory Racing’s Zach Osborne had a standout performance in the 450SX Main Event as he rallied his way to a second-place finish on the night. His teammate, Michael Mosiman, had a solid top-five finish in the 250SX class as the Western Regional division made its first appearance of the series in Salt Lake City.

Osborne shot off the line to capture the 450SX Heat 1 holeshot before settling into third early on the opening lap. He battled inside the top-five for the first half of the race before a mistake dropped him back to ultimately finish eighth. In the Main Event, Osborne had another great start as he positioned himself in third early on. Battling for a podium position, he vaulted himself into third about halfway through and he continued to push his way into second by lap 17. He rode a solid pace through the checkers to finish only five seconds back for second-place.

“I feel like we’re building some momentum here,” Osborne said. “I’ve been enjoying this Salt Lake trip and I feel like I’m in a good headspace, which is good. I managed two good starts tonight and was able to come away with my second podium of the stretch here. I really felt like I was in a good position tonight and we had a good result so I’m pretty happy with it.”

Anderson got a top-five start in 450SX Heat 1 and he battled his way into a podium position on the final lap, securing a third-place transfer into the Main Event. He got a good jump off the start in the Main Event but he got shuffled back where he rounded the opening lap in seventh. He began charging his way through the pack but he went down and dropped as far back as 14th in the early laps. He climbed his way back up to ultimately finish seventh in the race, where he now sits fourth overall in the 450SX Championship standings.

“I felt really good in my heat race, I was riding really good and ready for the Main Event,” Anderson said. “My start in the Main was actually a good start but I just got shuffled back and then I ended up falling. It wasn’t the best finish but I worked my way back up to seventh and I’m just looking ahead to the next round.”

Dean Wilson, the fifth-place qualifier, grabbed a top-five start in 450SX Heat 2 and he battled inside the top-five for the first half of the race. He made his way into fourth by lap five and from there he finished strong in fourth. In the Main Event, Wilson didn’t get the most favorable start but he battled his way into the top-10 by lap five. He worked his way up to teammate Anderson, where the duo pushed each other through to the finish with Wilson taking eighth for the night.

“Qualifying was pretty good, it has been recently,” Wilson said. “In the Main, I had a really bad start and I just made slow passes – coming from 17th up to eighth. It’s not a great result but the good thing is we get to try again on Sunday. I just really need to work on my starts and I think we can be in the top five.”

Michael Mosiman and the 250SX Western Regional division returned to racing with the seventh round of the championship and their first appearance in Salt Lake City. Mosiman qualified eighth overall, where he lined up in 250SX Heat 1. He got off to a third-place start and moved into second by the halfway point. With one lap to go, Mosiman went down attempting a pass for the lead but he quickly rebounded to salvage a second-place transfer. In the Main Event, he got started just inside the top-10 and immediately put his head down to begin charging through the field. He worked his way up to fifth, securing a solid top-five finish in the first race back.

“It’s good to be back to the races!” Mosiman said. “It’s a stacked class right now with everyone healthy and it was pretty hectic out there today. Fifth on the day, I’m a little bit disappointed in my riding but I’m stoked that we get to race again soon and I’m looking forward to the next round.”