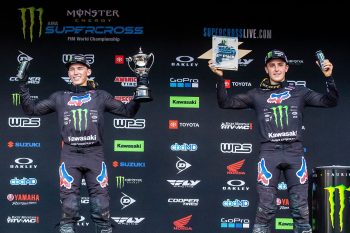 Monster Energy Pro Circuit Kawasaki’s Austin Forkner kicked off the Western Regional 250SX return with a big win inside Rice-Eccles Stadium. Joining him on the podium was teammate Cameron McAdoo with his first podium finish of the season.

Forkner’s win pushed him into second place in the standings, 10-points back of the leader with two rounds remaining, including a race on Sunday and the showdown a week later.

Forkner had spent 123 days looking forward to lining up again and his hard work during the downtime paid off. He showcased speed during qualifying, won his heat race and shot out to the lead on the opening lap of the main event. Even as his rival pressed towards his Kawasaki KX250, he turned up the speed and was able to cross the finish line with a 3.1-second advantage.

“We’ve been working hard at the track during our break,” said Forkner. “To be honest, this is the hottest race we’ve had and you add in the altitude, it’s not easy. It was definitely the toughest race we’ve had all season. Which makes it that much sweeter. I think we learned a lot tonight that we can continue to build on for the race on Sunday.”

The night show started with a heat race that showed McAdoo was here to race, nearly earning the win but finishing third. He tucked in at the front on the start of the main event and had raced into second at one point before settling into third. He maintained his speed and finished two seconds ahead of fourth place. His third-place finish was his second career podium.

“We worked really hard in the off time and it wasn’t always easy to keep it going when we didn’t know when we were coming back racing,” said McAdoo. “But this is what it’s all about – seeing the hard work pay off. I’ve really tried to stay focused on knowing that the work I was doing would get me results and I’m really happy to be up on the podium.”