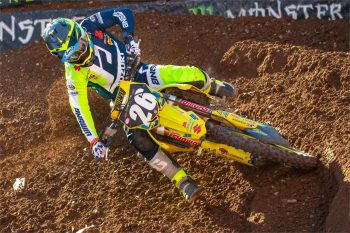 Alex Martin returned for 250 West Coast racing with a top-six finish on his Suzuki RM-Z250, securing fifth place in championship points standings as Broc Tickle showed improved speed on his Suzuki RM-Z450 as his broken hand improves. A race incident, however, kept teammate Fredrik Noren from a strong finish after grabbing the holeshot in the Last Chance Qualifier (LCQ).

‘A-Mart’ proved he was ready to get back to racing and showed aggressive speed throughout the day. In the Main Event, Martin crossed the holeshot line in fifth place, quickly moving up to fourth and charging hard while the pack was tight. Although a small mistake with another rider cost him momentum, he fought-hard to bring his JGR-tuned Suzuki home in sixth. Sitting in a solid top-five position in the title points, the finish slightly closed the gap to fourth-place in the standings.

Said Martin: “It felt awesome being back at the races again. I was frustrated with my riding in practice, but I managed to turn things around in the night show with great starts and stronger riding. I’m excited to build off a great ride in the Main and get that JGR Suzuki up front on Sunday.”

“Alex rode solid all day,” said Team Manager Jeremy Albrecht. “He made a few mistakes that kept him from a top-five finish. We have positives from today and some things to improve on. Starts were good, we just need to work on consistency and race management.”

Tickle started off strong and consistent in qualifying and progressed his way up into the Main Event. Although a mid-pack start held him back from showing how far his hand injury has improved, Tickle continued to push through the pain. He is looking to gain confidence and end the season strong.

Said Tickle: “Today was a lot better than Sunday’s race for me. I felt better on the bike. I’m looking forward to making progress with my hand over the next couple days before Sunday and gaining some confidence during these last three rounds. Thanks to the whole JGR crew for all their hard work.”

Noren grabbed the holeshot in the LCQ and was riding a front-pack pace, eager for a transfer position into the Main. Unfortunately, ‘Fast Freddie’ clipped another rider and was unable to quickly remount but not re-aggravate his ankle injury in the crash and his healing will be further along at Sunday’s race.

“It wasn’t the day I was looking for,” said Noren. “I was sitting in a transfer spot in both the heat race and the LCQ, but I fell in each. I’ll regroup and come into Sunday good. I want to say a big thank you to the whole crew.”

Added Albrecht: “Freddie showed speed, but mistakes and crashes held him back tonight. He just needs to smooth out and he will be where he wants to be.”

The riders take to the track again on Sunday, June 14th at 7:00 PM ET in Salt Lake City for round 15 of the series.