First premier class win next on the agenda of Osborne

Up-trending conclusion to the season in Utah has been impressive. 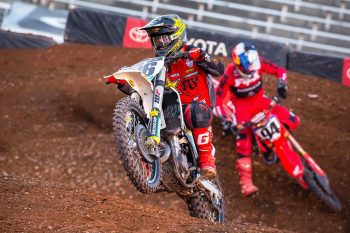 While he’s still maintaining a race-by-race approach in the closing stages of Monster Energy Supercross, Osborne’s form has been a major talking point this month.

“For sure, of course that’s the goal,” Osborne said. “I’ve got everything in the top five but a win so far since we’ve been here.

“But, like I said the other day, you have to walk before you can run and this season’s been really challenging for me up until the first race of this little swing we’re doing. For me, it’s been really positive this whole trip and I can’t be too disappointed.

“My main goal was to come here and kind of turn the momentum of the season that I had going, which was trending down, and get trending up – I think I’ve done that.

“It takes a lot of pressure off me just to hang some results and be up in the mix. I think that the win will come soon enough. I mean, I’m in a good position as far as my body goes and I feel like I can do it before we leave here.”

Two-time 250SX East champion Osborne has been both quick and consistent since the series arrived in Utah for its final seven rounds and, with three to go, the fast-starting 30-year-old has proven a podium regular in recent races.

“I think the biggest thing for me right now is that I’m in a really good headspace,” Osborne said. “I feel fresh when I get to the races and I’ve just been really enjoying the time here in Salt Lake with my family. It’s honestly been a huge refresher for me.

“My bike’s changed a little bit from the beginning of the year and I’m doing a little bit better at adapting the bike throughout the day, but the biggest thing is that I’m enjoying riding right now and going to the races. This whole thing’s been really good for my psyche and where I’m at in life.”