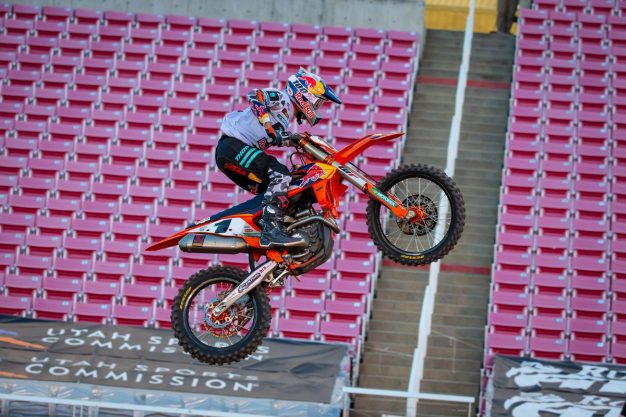 Today was a pretty complete day. In the heat race you took care of business and then that main event, a good battle early and then won this one as well. Did you feel like overall, with yourself, the bike, that everything just gelled today? From front to back, it just seemed like a complete day.

It turned into that, for sure. I mean, honestly, I feel like my speed has been good this whole time. I mean, it has been good, yeah, today was good. I felt like the heat race, I actually made a little bit of mistakes and stuff like that, but was able to still win and then the main event, just getting that good start really helped. Kenny [Roczen] was really fast at the beginning and he was like that in the heat, but I just kept plugging away doing my laps and he fell off a little bit, so I got into where I could just ride my own race. It was a great race to win, I mean, again it’s huge and it was awesome to be able to get my second win here in Salt Lake.

Talk about the whoops and the turn after the whoops. You and Kenny went at it probably 18 laps between the heat and the main there, so just talk about your strategy and your lines that you’re using through that section.

Yeah, I mean, he’s obviously really quick in the whoops and I’m getting better, but I wasn’t as fast as him. I knew that if I hit that line all day, he wouldn’t be able to pass me no matter how fast he was going, so that was my strategy. I mean, I saw he was going more to the right and that looked like a better line, but like I said, in my head, I felt like he couldn’t make the pass there. In the heat he was really getting the whoops and the main, I felt like I was holding my own a bit better when they got more chewed up, so yeah, that was a little bit of the strategy there.

Early on in the main event you were obviously in battle with Ken, so were you anticipating that he was going to drop off at some stage? Or what was going through your mind at that point of the race?

Just trying to do my laps. I felt like our pace was really good and we were both riding good. He was a little better in places, I was a little better [in othera] and I felt like, yeah, we were just riding really good. I think the track was one of those that you had to give and take – there wasn’t a ton of passing spots, but yeah, I was quick in my laps and I wasn’t sure. I mean, after the heat, he was super-fiery and we did 10 hard laps, so I kind of felt like maybe he would figure it out or whatever, but obviously he seemed to make mistakes and whatnot. He was riding good, so definitely he dropped, I guess.

In the heat race, Kenny was doing that three three before the finish line and you were doubling. Were you aware that he was doing that during the race and he was gaining quite a bit of time on you?

No, not until after. I mean, I had done it in practice and, honestly, I don’t know why I wasn’t doing it in the heat. But yeah, after the rewatching in the semi and stuff, I could see that’s where he was really catching me a lot, so I knew for the main that it was going to be important to hit it. Like I said, I’d done it in practice and it was more just the way the track ended up being, it was a lot more hard pack I’d say in the night show versus practice, so I guess I was second-guessing that. In the main, I think I hit it about every lap, so that was a good deal.

To get through the end of the season, to try and get the results that you want to get for the championship, you obviously have to get the wins in there, but is there any mind games going on? Are you trying to put pressure on everybody else?

I was trying, but [Eli Tomac’s] been… like I said, I feel like this year, he’s been very mentally strong and he’s been freaking ripping. So, I think it’s a little easier with some of the other guys, but not so much with him. At this point, yeah, I just try to do what I can on the bike and, keep getting great starts, which I think has helped. I’ve gotten first and second twice now, so I think that’s about as good as I can ask for. Obviously I’ve got three more and we’ll see what will happen, but I’ve been happy just knowing that I gave it my all these last seven and really turned into… So far, I think it’s been good just to be able to run with Eli. At the beginning of the season I think he definitely had a bit of the upper-hand, so that’s been cool. 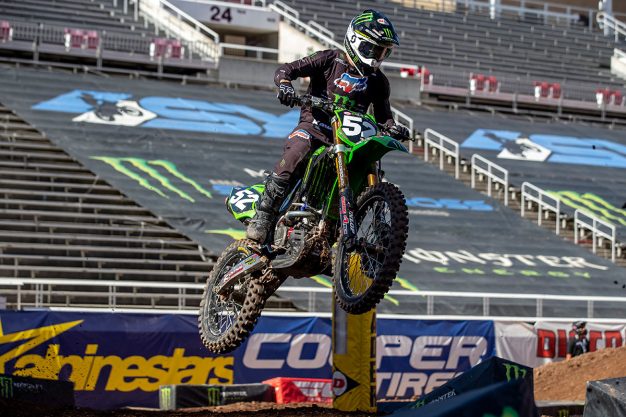 Austin, congratulations on the win. During the break, I had a chance to talk to you at one point, I know you’d switched over to some outdoor stuff and then kind of tampered back into Supercross. And you said Robbie Reynard had told you, you were on track and everything was looking really good. Once you’ve been able to get back on Supercross full-time, were you able to find some of that 2019 speed that you had? And I know you’re coming back from the injury early in the year, but does it feel good to be back where you were, where you’re just clicking on full speed?

Yeah, it feels good. And it was more so just, I feel like maybe a little bit of my trust in my knee and stuff – this break has only helped it get stronger. So yeah, it feels good and, obviously, I was pumped to come out here and start the whole three-race season-ender like I did today. And like Dylan [Ferrandis] said, it was really tough – I was giving it all that I had. You have to really play out there with… You can’t really just go out and get it, you’ll blow up. Especially this being our first race everybody’s told me, your body will adapt the longer you’re here or it’ll get better, but they said the first race is pretty tough and it was just the altitude and the bike was slower. I mean, that wasn’t the bigger thing, it was mainly just the breathing, but yeah, no, I felt solid and I think that the off-season, or I say off-season, just the little four-month break we’ve had, the work that I’ve done, I think it shows.

Normally I don’t bother talking about practice that much, but I’m curious what the heck was going on in practice out there [with Hunter Lawrence]? Was there something that prompted that or what was happening?

That little mess. No, just kind of like little frustration. I mean, he kind of got in my way a little bit on a fast lap that I had going and I just rode by really close to him, just like whatever. And then he cleaned me out in the next turn, so it was… Now I can look back and laugh on it, but at the time I was a little frustrated, but I wasn’t really worried about it. It’s fine.

The vision out there, pretty late in the afternoon it looked like you guys had come out of that rhythm section, make that corner for the triple and how blind was that for everybody?

For me, the triple wasn’t that bad. In my heat race though, I missed the next rhythm section with that big double over the start straight. I missed it two or three times or four. I don’t know. Because when our heat race was there was shadow was halfway through the turn, so we would go through the and where it was still shadowed, it was slick. We’d go to good dirt, slide, and then hit it and my eyes, they were adjusting right before I hit that, so I missed it a couple laps just because I didn’t want to jump into the tough blocks, not being able to see where I was going. That was the only part that was a little iffy for me. By the time the main rolled around everything was pretty solid and I didn’t really have as much trouble over the triple. I mean, the sun was in your eyes, but I was pretty solid there all day – I didn’t really have any trouble with that.

You’re now 10 points down, so how important was this win, first of all? And did you kind of come into this race in a do or die situation?

Yeah, I’m kind of in the position right now where I just have to win out and then that still might not be enough depending on how Dylan finishes, so that’s just what I’m trying to do. There’s not really a plan like, ‘oh, look at the big picture’. I mean, there’s only two races left now, so that’s kind of do or die. I have to go out there and try to win and that’s… I can’t control anything that happens around me, all I can control is myself. All I can do is just go out there and win and not make any big mistakes, but honestly, that’s not even really in my head right now. I just need to win – it’s pretty simple.