Third victory of the year captured by Webb at SLC4

KTM-mounted champion climbs to second in the 450SX standings. 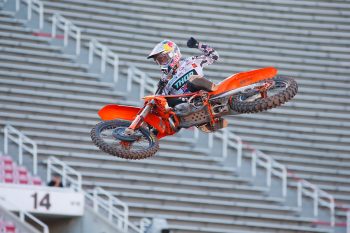 While Webb jumped out front early to withstand a challenge from a gritty Ken Roczen (Team Honda HRC) to lead every lap, Tomac was forced to climb from 12th at the end of the opening lap. Fourth was top-qualifier Blake Baggett (Rocky Mountain KTM WPS).

Roczen, meanwhile, again dropped back down the order from around the halfway point, eventually crossing the finish in fifth place as he continues to battle health problems through the Salt Lake City rounds.

Anderson has now moved to fourth in the standings after Monster Energy Yamaha’s Justin Barcia crashed out of the main event, his factory YZ450F too badly damaged to continue in what appeared to be a strange incident.

The 2020 Monster Energy Supercross Championship will again be staged inside Rice-Eccles Stadium this Sunday, 14 June. Tomac currently carries a 27-point advantage over Webb, with Roczen a further two behind.