Future up in the air for Supercross-only Team Tedder KTM rider. 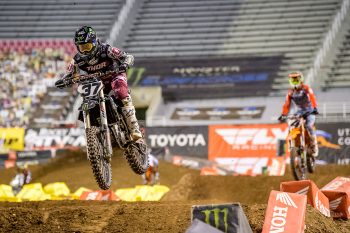 Making a large enough impact to secure his future has been critical for 450SX graduate Martin Davalos in Salt Lake City’s final stages of the 2020 Monster Energy Supercross championship.

The 33-year-old stepped up to the premier class this season with Monster Energy Team Tedder KTM, delivering a consistent haul of results and managing to overcome a tailbone fracture sustained at Daytona.

Davalos has been solid in Utah so far aboard his factory-specification 450 SX-F, going 6-11-8 in the three races despite spending minimal time preparing in the lead-up. On a Supercross-only contract, these remaining rounds will be instrumental as he currently sits 13th in the standings. He continues to gain comfort after spending his entire professional career in the 250SX regional series.

“I’m just really having a good time,” he said. “I didn’t know that we were going to finish the season and I’m Supercross-only, so I started riding outdoors just to have some fun. Daytona, in the sand section Deano [Wilson] landed on me and I fractured my tailbone, so I had to take about a month off. Like I said, I rode outdoors for a little bit and then got on the Supercross track about a week before coming to Salt Lake City.

“I’m really enjoying how everything’s going, still trying to learn the bike. I know I’m pretty experienced when it comes to racing because I’ve been doing this a long time, but this motorcycle really is a different thing – something that it’s taken me a little bit to get used to it.

“I feel like things are coming along, my starts need to get better because I feel like I’m really inconsistent, but at the end of the day I’m racing with such gnarly dudes and it’s so amazing to be on the gate with them – I have a lot of respect for everybody. I feel like I’m settled more, learning how to control the power and here in altitude the bike is a little bit easier.

“I’m not racing rookies, not racing kids, I’m racing real men… champions. It’s unbelievable the talent and speed that these guys have, one of those things that I think everybody’s so close. To get into the top three, those guys are pushing really hard, but without getting a start, the talent’s so deep and it’s hard to come through.

That’s one of the things I’ve learned, if you don’t get a start, you don’t give yourself a chance – at least for me – to learn the pace that’s happening in the top five. It’s impossible because sometimes I’ve been caught up in 13th, 14th, 15th place and they’re going fast.

“It’s hard to pass, so sometimes you just have to take it that you’ve had a good race. I’m getting that little more comfortable just learning that top 10 speed and fifth was good in Atlanta, so I just have to keep getting my feet wet and learning off these guys a little bit.”

Davalos is yet to sign a deal for the 2021 season, instead focusing on upcoming races in a bid to make an impression and potentially earn a better deal for next year. With a best result of fifth in the Atlanta main event prior to the stoppage, he’s displayed front-running pace at times.

“It’s still complete wide-open,” he added. “I’m just hoping I can get something. There are so many good riders, so many champions and a lot of teams are up. I know everybody’s going to be searching, but at the end of the day I’m trying to focus on this year, trying to do my best and whatever happens, happens. I feel like I still have some years in me.”