SLC3 main event ‘a race for the ages’ declares Webb 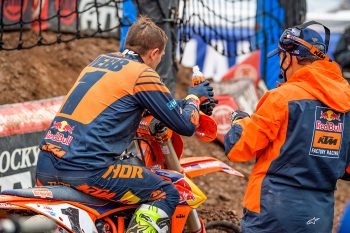 Webb and Tomac traded the lead on multiple occasions throughout the 20-minute duration, lapping up to fourth place in the process.

It was eventually Tomac who got the upper-hand on Webb in the final laps, enabling him to extend a 26-point lead over Ken Roczen (Team Honda HRC) in the standings. Webb is third, again 32 points back from the lead.

“Overall, it was an incredible race, like you said,” Webb recalled. “We were laying it all out there. I think I was first to the first turn and then Zach snuck inside of me. I was behind him for about a lap, when I cleared him it was me and Eli.

“I don’t know how long I was able to lead, but I knew he was all over me. I was doing that line right in the whoops and it felt good, but after he passed me I saw it was definitely not the preferred line. It was a barn-burner – he led and then I led, I think I ended up leading twice and he led twice.

“The lappers were insane. From my end, I know I left it all out there – I felt like we were just both wanting to purely win. I thought I uncorked a pretty cool rhythm, but I was just able to watch the highlights and saw that he did that three, three, three. I feel like that was a race for the ages, for sure.

Despite the need for Tomac to have an off result if he’s to take the championship down to the wire, Webb was respectful throughout the showdown, as was Tomac on his way to victory.

“We’re both aggressive-natured and want to go for it, but I feel like we’ve always been pretty respectful with everything,” added Webb. “Tonight was the same. Obviously, I want to get after this championship and stuff, but it’s still a ways out.

“For me I was just wanting to race hard and try to win – that was my main goal. It’s cool for us to be able to battle like that, especially with him having the red plate, and stuff like that. You don’t want to just clean someone out like I saw Bam-Bam [Justin Barcia] and him in the heat race or whatever. It was good racing.”