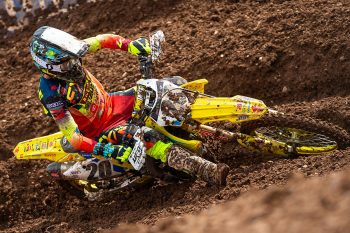 Injury-struck Broc Tickle is looking to make genuine progression over the closing four rounds of Monster Energy Supercross after enduring the most difficult main event of his lengthy career in Utah on Sunday.

Tickle broke his hand in the first race back at Salt Lake City, sidelined for SLC2 and then riding through the pain to return with JGRMX Yoshimura Suzuki at round 13 of the season.

Dealt with some of the most difficult track conditions in memory after heavy rain fell at Rice-Eccles Stadium during the morning, the 30-year-old transferred via the LCQ and then pressed on for 17th position. His goal is to build from there in the coming rounds.

“I was just glad to be back racing, to be honest,” Tickle admitted. “Obviously, the first race, I didn’t get to race back here in Salt Lake, sat out the week and came back yesterday. It’s been tough, but I want to finish out these last four and make progress.

“I would say my hand is probably not going to feel great, even by the end of it, but I’m gonna manage it the best way I can, get as much therapy as I can. It’s healing and it’s tough to accept that’s what I’m dealt with, but we’ve gotta make the best of it and if I can make progress and by the end of this be close to where I want to be, I’ll be happy and we came here for a reason.”

Tickle said that it’s both discomfort and a lack of strength that affected him over the weekend, but with improved weather conditions expected for Wednesday, added time to recover should be in his favor.

“I basically broke my pointer-finger metacarpal and my fifth metacarpal, which is your pinky,” he explained. “So, you can imagine my grip strength isn’t 100 percent by any means. On top of that, the conditions were tough. Yesterday was a struggle, maybe the toughest main event that I’ve done, to be honest, and I’ve been doing this for a while.

“For me, I just want to make progress and by the end of this, be where I feel like I should be. Anywhere from sixth to 12th, if I can be consistently there, I’ll be happy. I’ve been dealt a lot of different circumstances in the past two years, so I just want to make progress and be in these last four. I feel like I still have potential to be in the mix and that’s why I’m still here.”