Assorted racer comments following the 13th round of the season.

In Quotebook, a selection of riders detail round 13 of the 2020 Monster Energy Supercross, an FIM World Championship, at Salt Lake City. 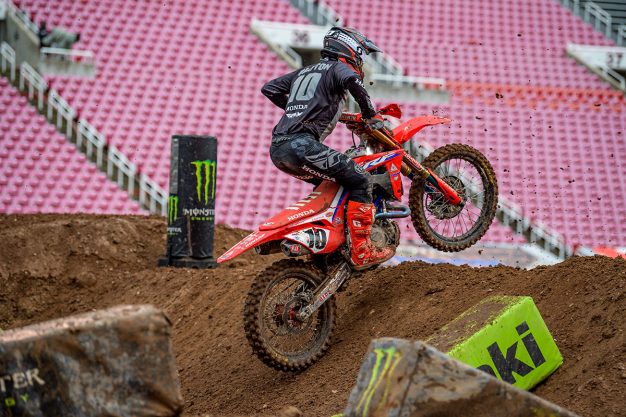 Cooper Webb (Red Bull KTM Factory Racing) – Second:
It sucks I got second, but man, it was a battle from lap one until the last lap. The conditions were tricky and the lappers were gnarly – a lot of it came down to that. It seemed like one lap I might get it right and one lap he might get it right, but we were really pushing hard. It was a fun race even though I got beat. We’ll try to get the top spot on Wednesday.

Jason Anderson (Rockstar Energy Husqvarna Factory Racing) – Third:
I’m happy to be up here. I feel like I’m getting closer to old form and my headspace is a little better, so I’m just trying to keep building. I feel like I’ve had some good speed the last two races, so I’m going to work on some stuff and come back at the next round and hopefully try to make it a little less easy on the championship guys.

Zach Osborne (Rockstar Energy Husqvarna Factory Racing) – Fourth:
It was a decent day, I felt really good in the one qualifying session that we got and the heat race was good with the holeshot even though I had a good little spill. I came out with a holeshot in the main, but I rode kind of tight and the track was a little sketchy for me. I didn’t really find the flow right off the bat, so it was a tough main, but it was a fourth-place, so we’ll take it. I’ve got a little bit of consistency to build with so I’m happy with it.

Dean Wilson (Rockstar Energy Husqvarna Factory Racing) – Sixth:
It was a little bit different of a day with the weather and having only one qualifier, which went really well with a second. Unfortunately, with the rain I spun really hard on the gate and was pretty much dead last going down the start straight. I knew it was important to stay on two wheels and just try to click people off every lap, so that’s what I did. I don’t think it was my best riding but I managed to get a sixth, which is not too bad considering I came through the pack with a bad start.

Justin Barcia (Monster Energy Yamaha Factory Racing) – Ninth:
It was a tough day, not a whole lot more to say than that. It didn’t go the way I wanted to. We’re definitely going to keep trying, stay positive and keep moving forward. I’m really looking forward to going racing in two days to try and turn things around.

Aaron Plessinger (Monster Energy Yamaha Factory Racing) – 11th:
It started out pretty muddy and I was doing really well in practice. I went out for the heat race and I struggled pretty hard. The track dried out, got pretty rough, but I got a good start and was moving forward before I started to struggle and fell back to fifth. In the main it was pretty much the same thing. I was moving forward and got up into seventh and was right on Roczen for sixth, then I tightened up and couldn’t hold on anymore and fell back to 11th.

Eli Tomac (Monster Energy Kawasaki) – First:
We had a pretty great battle going, but I did not want to let the win go. I ended up getting a triple combo at the end of that rhythm, which was the real make or break moment for me. That was a great battle and a lot of fun. The track had some great character and it was just a great day for the Monster Energy Kawasaki team.

Ken Roczen (Team Honda HRC) – 10th:
These past two races obviously haven’t been the results that we needed to be in the fight. That doesn’t mean that we aren’t still trying. Sometimes you’re dealt a hand of cards that are completely out of your control, but we’re trying to make the smartest and quickest decisions to get through some of the health issues that keep coming up. My heat went well and I led a handful of laps until I got a flat. The boulders started popping up and I think I know right where the rock got me in the whoops. With the weather changing, we tried to make a tire decision that would give me the best chances of not having that same thing happen in the main, but that obviously didn’t work well. I’m not the type of guy that likes to roll around or is satisfied with a fifth- or 10th-place finish, but sometimes if that’s the best you can do for the night, you just have to except it for what it is. I can’t thank my team enough for being patient with me and for never wavering in their support. I know the sacrifices they’re making to be up here and all of the work they’re putting in to give me the best equipment and support, and I want to do better for them. I couldn’t be more grateful for them and I hope we can turn this around and be in a better position to put up a fight on Wednesday.

Justin Brayton (Team Honda HRC) – Seventh:
What a crazy day – the weather was just wild! It rained all day yesterday and most of the day today. Then the sun came out right after practice, which kind of dried up the track for the heat race, which was actually pretty good. I got third and then the rain blew in again. It dropped like 10 to 15 degrees and was raining on us before the main event, but all in all it was a good day. I ended up seventh, ran sixth for a long time and then got passed with a few to go. Overall, it was a solid night. Of course I want to be closer to the top five, but I feel like we’re working our way there. We made some awesome bike changes this week and that really helped me in the muddy conditions. When I got off the track, I told the guys that I can’t wait to ride this setup in the dry, so hopefully we’ll be able to do that here in a couple days. Shane McElrath (Monster Energy Star Yamaha Racing) – Second:
Man, it was nice to get away with a second place! It was a tough track and very tough conditions. I’m bummed to get the red flag early and then to go down while leading race after the restart, but I’m happy with my effort. We’ll come back after the break and fight for this championship.

Colt Nichols (Monster Energy Star Yamaha Racing) – Third:
Conditions were really tough tonight with the rain and the transitions between everything made it really hard to put the laps together. I was able to salvage a podium, which is always nice, but I’ve got some work to do for the last two rounds.

Garrett Marchbanks (Monster Energy Pro Circuit Kawasaki) – DNF:
Today was a rough day. Between the rainy weather and sloppy track conditions, I didn’t help myself with the bad start in the main event. My ribs and back are really sore from my crash, so I will get checked out, take these 10 days to recover and go from there. I hope to be back out there a week from Wednesday and make up some points.

Jalek Swoll (Rockstar Energy Husqvarna Factory Racing) – Sixth:
Honestly, results-wise it was one of my best days, but it wasn’t up to what I felt like I could do out there. I got a pretty good start in the main event, ran up front for a little bit and faded back to sixth. The track was pretty brutal out there, but I was all about just staying up on two wheels and I’m happy I was able to do that to take home a career-best finish.

Pierce Brown (Troy Lee Designs Red Bull KTM) – Fourth:
All in all, it was a solid day and I couldn’t be happier. I ended up third in my heat race and fourth in the main event. This is my fifth Supercross race ever, so to have my best finish yet, I’m stoked!