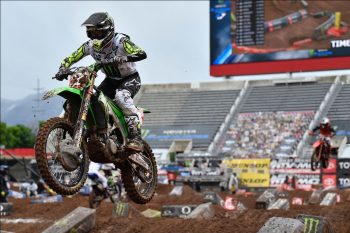 Monster Energy® AMA Supercross, an FIM World Championship returned for Round 13 and the third round at Rice-Eccles Stadium in Salt Lake City, Utah with drastic changes, including sloppy track conditions after heavy rains fell and the temperature dropped 40 degrees from Round 12 on Wednesday night. Monster Energy Kawasaki rider Eli Tomac accepted the challenge as he captured his seventh 450SX win of the season and further extending his points lead to 26.

Due to the rainy weather conditions, only one qualifying session for each class was held, with Tomac claiming pole position as the only rider to break into the 57-second mark in the 450SX class.

Tomac lined up for Heat 2 and right out of the gate found himself mid-pack in 10th. Wasting no time, Tomac put his KX™450 to work as he began maneuvering around his competitors and making his way to third with two laps remaining, where he would go on to finish.

As the gate dropped on the 450SX Main Event, Tomac launched out past the wet start straight and rounded the first lap in third place. For the first half of the race, the points leader carefully scouted for new lines in the technical track conditions, stalking the leader. Around halfway, Tomac made his move into the lead but just as he looked to be in the clear, he got passed after getting held up by multiple lapped riders trying to maneuver their way through the slick track. Determined not to give up the win, Tomac began to play cat and mouse with the race leader, where the two riders kept an extraordinary pace in the treacherous conditions lapping contenders all the way up to fourth place. With only five laps remaining, Tomac took command of the lead by jumping a rhythm section that was deemed impossible in the conditions and held his position to grab the checkers.

Tomac’s seventh win of the season puts him sixth on the all-time 450SX race wins list, tied with Ryan Dungey at 34 wins.

Eli Tomac: “We had a pretty great battle going, but I did not want to let the win go. I ended up getting a triple combo at the end of that rhythm, which was the real make or break moment for me. That was a great battle and a lot of fun. The track had some great character and it was just a great day for the Monster Energy Kawasaki team.”

Despite the added challenges for the day, Monster Energy/Pro Circuit/Kawasaki rider Garrett Marchbanks remained consistent once again qualifying fourth in the 250SX class.

Repeating his last race pattern, Marchbanks shot out of the gate aboard his KX™250 in second as the gate dropped on Heat 1 of the 250SX class, where he would remain for the entirety of the race.

As the gate dropped on the 250SX Main Event, heavy rain began to fall again and Marchbanks found himself buried mid-pack around the first corner. Making moves to the front of the field, Marchbanks swerved to avoid another rider reentering the track and suffered a hard crash. The incident brought out the red flag and Marchbanks did not restart the race.

Marchbanks and the 250SX East Region Championship will have a 10-day break and will resume racing Wednesday, June 17th as the regions switch off and Monster Energy/Pro Circuit/Kawasaki teammates Austin Forkner and Cameron McAdoo will come to Salt Lake City to race the next two rounds of the 250SX West Region Championship.

Garrett Marchbanks: “Today was a rough day. Between the rainy weather and sloppy track conditions, I didn’t help myself with the bad start in the main event. My ribs and back are really sore from my crash so I will get checked out, take these 10-days to recover and go from there. I hope to be back out there a week from Wednesday and make up some points.”