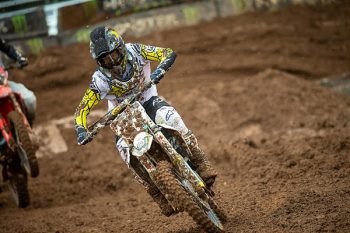 The Rockstar Energy Husqvarna Factory Racing Team continues to build momentum in the 2020 AMA Supercross World Championship Series with another solid day in Salt Lake City, Utah for Round 13. In the 450SX class, teammates Jason Anderson and Zach Osborne once again battled it out for a podium position with Anderson claiming third and Osborne close behind in fourth. In the 250SX East class, Jalek Swoll raced his way to a season-best sixth-place finish where he now moves into the top-five in overall championship standings.

With the final seven rounds taking place at Rice-Eccles Stadium, rainfall made for a much different experience the third time around as track conditions went from extremely dry and dusty, to wet and slick in just four days since the last round.

450SX
Anderson excelled from the beginning of the day, where he qualified third overall in the only session of the day. He went on to capture a great start in 450SX Heat 2 as he settled into second-place early on. He chased down his teammate, Osborne, out front and blitzed his way through the whoops to overtake the lead on lap five. He held strong to ultimately capture his first heat race win of the season. In the Main Event, Anderson got a fourth-place start and battled inside the top five early on. On lap six he moved into the fourth spot and he quickly set his sights on Osborne in third, making the pass by the eighth lap. From there, he maintained his pace to earn his fourth podium finish of the season.

“I’m happy to be up here,” Anderson said. “I feel like I’m getting closer to old form and my headspace is a little better so I’m just trying to keep building. I feel like I’ve had some good speed the last two races so I’m going to work on some stuff and come back at the next round and hopefully try to make it a little less easy on the championship guys.”

Osborne, the fifth-place qualifier, shot off the line to capture the 450SX Heat 2 holeshot. He led the first five laps before his teammate, Anderson, got by for the lead. Despite a crash, Osborne went on to secure a solid second-place finish in the heat. In the Main Event, he captured a big holeshot as he assumed the early lead. He battled a hard-charging group of riders early on and eventually settled into fourth behind Anderson, where he ultimately secured a top-four finish.

“It was a decent day, I felt really good in the one qualifying session that we got and the heat race was good with the holeshot even though I had a good little spill,” Osborne said. “I came out with a holeshot in the Main but I rode kind of tight and the track was a little sketchy for me. I didn’t really find the flow right off the bat so it was a tough Main but it was a fourth-place, so we’ll take it. I’ve got a little bit of consistency to build with so I’m happy with it.”

Dean Wilson had a great start to the day with a second-place qualifying position in the single 450SX session. In 450SX Heat 1, he battled his way from ninth on the opening lap to ultimately finish fourth in the heat race. In the Main Event, Wilson experienced some wheel spin due to the rain and he was delayed in getting off the line as he began well outside the top-10. He put his head down and charged up to sixth, where he matched his best finish of the season in sixth overall.

“It was a little bit different of a day with the weather and having only one qualifier, which went really well with a second,” Wilson said.“Unfortunately, with the rain I spun really hard on the gate and was pretty much dead last going down the start straight. I knew it was important to stay on two wheels and just try to click people off every lap, so that’s what I did. I don’t think it was my best riding but I managed to get a sixth, which is not too bad considering I came through the pack with a bad start.”

250SX East
Jalek Swoll got off to a top-five start in 250SX East Heat 2 but he got off-balance in the whoops and lost a few positions early on. He worked his way back up to eighth, where he secured a transfer into the Main Event. Swoll got off to a sixth-place start in the Main Event and he battled just outside the top five before a Red Flag came out to indicate a full restart. Upon the restart, Swoll got off to a great start in third, where he mixed it up inside the top three for the first three laps. He continued to battle inside the top-five through the first half of the race before settling in the sixth-place spot. He rode hard and smart to ultimately secure his best finish in sixth.

Honestly, results-wise it was one of my best days but it wasn’t up to what I felt like I could do out there,” Swoll said. “I got a pretty good start in the Main Event, ran up front for a little bit and faded back to sixth. The track was pretty brutal out there but I was all about just staying up on two wheels and I’m happy I was able to do that to take home a career-best finish.”