450SX contender settles for 10th position in SLC on Sunday. 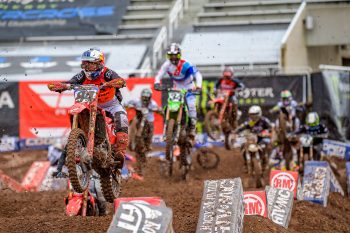 A lowly 10th-place finish at SLC3 saw Ken Roczen’s hopes for the 2020 Monster Energy Supercross championship fade further as red plate-holder Eli Tomac went on to record victory, ‘still trying’ in a bid to challenge for the crown.

Roczen went two laps down in trying conditions of Utah following morning rainfall, but the Team Honda HRC rider has declared that he will continue to give his all during the final four rounds.

Sunday saw Roczen lead his heat race before a flat tire cost him any chance of the victory, however, after circulating in fourth through the opening laps, he plummeted down the order to P10 by race’s end. As a result, he has fallen into the clutches of Cooper Webb, who had been a distant third in the standings.

“These past two races obviously haven’t been the results that we needed to be in the fight,” Roczen said. “That doesn’t mean that we aren’t still trying. Sometimes you’re dealt a hand of cards that are completely out of your control, but we’re trying to make the smartest and quickest decisions to get through some of the health issues that keep coming up.

“My heat went well and I led a handful of laps until I got a flat. The boulders started popping up and I think I know right where the rock got me in the whoops. With the weather changing, we tried to make a tire decision that would give me the best chances of not having that same thing happen in the main, but that obviously didn’t work well. I’m not the type of guy that likes to roll around or is satisfied with a fifth- or 10th-place finish, but sometimes if that’s the best you can do for the night, you just have to except it for what it is.

“I can’t thank my team enough for being patient with me and for never wavering in their support. I know the sacrifices they’re making to be up here and all of the work they’re putting in to give me the best equipment and support and I want to do better for them. I couldn’t be more grateful for them and I hope we can turn this around and be in a better position to put up a fight on Wednesday.”

While Tomac has now extended a 26-point advantage in the 450SX championship, Roczen has been able to retain second position and is now just six points ahead of Webb after the latter scored runner-up over the weekend. The series will continue on Wednesday, marking round 14 of the scheduled 17.