Round winners Tomac and Sexton recall third-straight event in Utah.

We’re almost halfway through the seven-consecutive races at Rice-Eccles Stadium to complete the 2020 Monster Energy Supercross season, with Eli Tomac (Monster Energy Kawasaki) and Chase Sexton (Geico Honda) winning SLC3 on Sunday. The pair spoke to the media post-race in Utah via Zoom and here’s what they had to say. 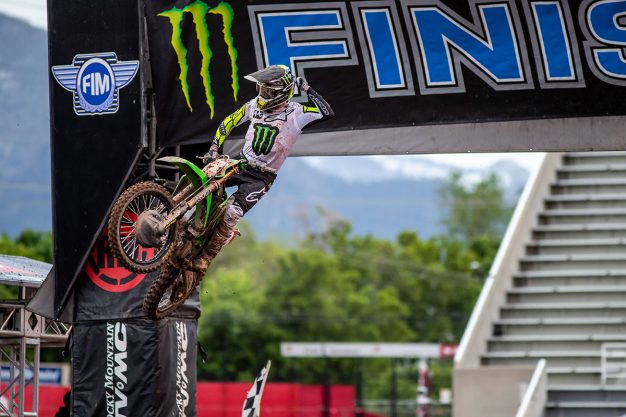 Eli, great ride and very entertaining for everybody. Take us through your race and how it laid out for you.

I’ve got to start with saying that was a freaking sweet race. It’s easy to say for me because I won, but it was really fun. On the line I was a little bit nervous about my gate because I was pretty far inside. I was third on the inside there, kind of played the safe card, but got a really good jump – got good traction there and slid around with those guys on the inside. Coop was in front of me and we just got going – we both had really good flow today on the track. It was cool because we were still able to get those jump combos and really get around the track, but at the same time it was a little bit sketchy enough to where some guys were kind of floundering around. Really fun racing conditions, like I said, we went back and forth with each other twice there. It was just a really good race.

With the rain stopping right before the 450 main, did the track get better as you guys went?

Overall, the traction was getting a little bit better, but at the same time the main line was getting more chewed up. Turn two, that rut started getting pretty squirrelly. We’d come out and go double and then that would start that triple-triple rhythm section, that one got pretty bad where it was kind of like a big hook up the ramp, so you had to be careful there. Surprisingly, we were getting through the whoops – I think that’s where me and Cooper were really a lot faster tonight was the whoops. We were passing lappers and those guys were kind of rolling through there, I think that’s where we were making big time on everyone.

How much are you thinking about these lines as the race goes and how much is instinct where you just see an opening and give it a shot?

The one rhythm that I felt like was instinct was that second lane with the double and the triple, triple, triple. I kind of knew it was there, but at the same time you just didn’t know how it was going to form up. The way those transitions were getting was kind of nasty and square on the bottom. That was the one spot I felt like you could change up or miss.
During the podium after everything was over I just kept hearing you say over and over how much fun that race was. Is a head-to-head battle against a really close competitor more fun than a blowout win?

Well, the win is sweet. It’s easy to be happy. A lot of times in these mains you’re either getting passed once by the guy who wins or vice-versa where you make the pass and you kind of start running way. The way we did it, I was scrapping to the end. The second-to-last turn, I was dabbing and freaking pinning it and hanging off the back. It was just a good race that way – as a competitor, it just felt like everything was right.

I was just in the zone to where I’m like, ‘at this point there’s no slowing down’ and I didn’t feel like I was over the edge, right? We were both racing each other aggressive, I mean, we’re both going to race each other enough and long enough that it’s hard to start that game, so… that’s that. We both race each-other hard and aggressive, but I wasn’t in the position where I’m like, ‘I’m getting squirrelly, I’m getting sketchy here, I need to back it down’. I felt in control that whole main.

Since we’ve gotten to Salt Lake City it’s been Shane [McElrath] versus Chase, Chase versus Shane. You guys have been riding well and you seem to be one-upping each other every chance you get, coming into this race with the red plates and tied on points in tough conditions. You’ve come away with it with that points lead, but I want to talk about a couple of things that happened in that main event, there was a red-flag early that sent you guys back to the gate, so take me through that and how it affected you.

The first race I got a really good start, came into the second corner and Shane came inside me, then I went off the track. The second rhythm section, I got the rhythm clean, I think Enzo Lopes rolled the last jump and I landed right on top of him and ended up sliding out, so that was a bummer. I really felt like my speed was really good all day – I felt like I had an edge on everybody. I think I could still get up to at least, I know I could have got into second, but Shane, I was kind of keeping tabs on him the first couple laps. I felt like my speed was good enough to maybe get up to him. It definitely worked out in my favor to get the red flag. I got a decent start, think I was second and I was kind of just riding behind Shane. The first race, I made a stupid mistake early and I was like, ‘I’m not going to do that again, I got to wait this thing out’. I felt like I was faster in the whoops, I got close to him a couple times, but I kind of backed off and then kind of got back close. Then he ended up coming together with a lapper, which gave me the lead. After that I kind of put my head down for a few laps and ended up running into the same lapper in that corner and broke my front brake system, so I didn’t have a front brake for over half that race, which was kind of a bummer. It was kind of sketchy with how the track was. I felt like I rode decent, I felt like I rode really well all day, but that first race was not good for me. Getting the restart played in my favor and on the line I was like, ‘I got to win this race’. There was no second place tonight – I had to go out there and win. I feel like we did a good job with that.

After everything that’s happened in these last two races and how upset you were last Wednesday night, to come in and get a win like this was huge, especially because there was a head-to-head battle with Shane. How important was it for you to enter this short break with the red plate again?

I was obviously disappointed after last Wednesday. I felt really good that day too, I just made a small mistake and it cost me big time. Getting back to fourth was okay, but I want to be battling with Shane for wins, so I was bummed, but I kind of went in today like this is a must win and to get the momentum back on my side. I felt like I was off a little bit coming to Salt Lake, I just need to get the momentum back on my side. I think today with those conditions, it kind of suits my riding style a little bit and I like those rutty, more east coast type conditions because it wasn’t a full mud race. I knew coming in today that I was going to be in a good spot and qualifying first in my heat race and then obviously getting a break in the main event and going out and doing what I was capable of doing all day, I was pumped on that. That’s why I feel like the emotions were high after the race, definitely excited to have the red plate back to myself.

We’re going into a break now [for 250SX East], a short break nonetheless, but is this something you guys are ready for or would you rather just keep on racing?

Like you said, we have a little break, only like 10 days or something like that, so for me it will actually let me get back to my normal-ish riding schedule. I’ll ride some this upcoming week and then get back into the race schedule next week. I mean, we’ve been off for so long that taking a break right now doesn’t really feel right after three races. It’s going to be weird being in Utah and not at home, just kind of keeping yourself entertained. It’s going to be different having the west coast guys here, so close, but you can’t even go watch the race. Everyone’s in the same boat.