Confidence on the rise for Stewart after maiden top five 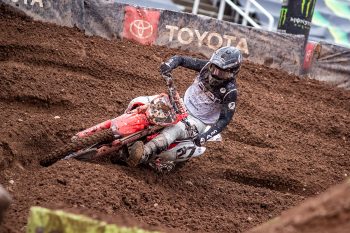 A first-career heat race win and top five result in the main event have marked an upswing of form for Malcolm Stewart in Salt Lake City over the past week, adding to his confidence by the round during the latter stages of 2020 Monster Energy Supercross.

Last year saw Stewart sidelined with a broken femur through much of the season, however, the Smartop Bullfrog Spas Honda rider has been remarkably strong since the sport’s resumption in Utah.

Stewart has so far delivered 11-7-5 finishes in the three rounds to date at Rice-Eccles Stadium and, although those results don’t all tell the story, his flashes of brilliance have been a talking point in recent weeks. He’s sixth in the standings with four rounds left to run.

“I’ve been really happy about how everything’s going,” Stewart said. “I’ve literally felt like we’ve done these three races in different states just because the dirt’s changed so much. For us, I was so nervous at the first race – it kind of felt like Anaheim 1, having everybody back healthy.

“We’re getting the ball rolling, I got my first top five yesterday, so that was good. I’m really looking forward to Wednesday. There was carnage everywhere out there on the weekend, I was literally coming around every corner and there was a yellow flag waving [laughs].

“It’s one of those things, a mud-race where you’re getting through it – the hardest part is literally just staying up. I saw Zach [Osborne] for a little bit, trying to make a good charge and next thing I know, I look up and he’s two rhythm sections ahead of me. I’m like, ‘what happened?’. It’s so easy to make those simple mistakes.

“Eli [Tomac] and Cooper [Webb], seriously, they were in a different zip code to all of us around this race track. For me, I felt like a little turtle, I ain’t gonna lie [laughs]. Again, it was a fun race though, but I’m hoping that we’ll never have another mud race in Salt Lake City again [laughs]!”

On his ride to a heat race victory at SLC2 where he managed to track down defending 450SX champion Webb, Stewart said that although he felt ‘due for one’, it was a turning point for him in the premier class. His last major Supercross win came in 2016 when he captured the 250SX East crown with Geico Honda.

“That heat race win was good, I’m not gonna lie about that,” he added. “I mean, I knew I was due for one, but it’s all about timing. Heat race wins feel like a little Triple Crown for us because there are so many guys that go out there and go wide-open for six minutes, so to get one of those is the next stepping-stone for jumping on that podium.”