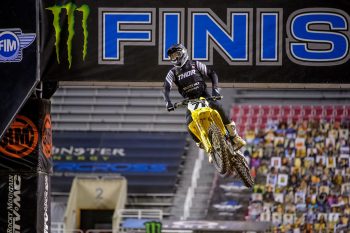 Suzuki and its RM-Z450 riders battled back after a challenging second race re-opening of the 2020 Monster Energy Supercross for Round 12 of the season wrap-up on Wednesday evening.

Under a closed circuit, due to the ongoing Coronavirus COVID-10 pandemic, H.E.P. Motorsports’ Kyle Cunningham, Adam Enticknap, and Ryan Breece showed good pace on their Suzuki RM-Z450s during the night show while JGRMX/ Yoshimura/ Suzuki’s Fredrik Noren was held back from qualifying for the Main Event after an early race crash.

Cunningham had a notable night as he fought his way into the Main Event. He almost grabbed the holeshot in his heat race and charged with the lead pack for most of the race and ultimately finished with a top-nine transfer position. In the Main, he continued that presence and proved he has what it takes to compete with the top contenders on his H.E.P.-tuned RM-Z450.

With the fastest qualifying time amongst the Suzuki riders, Enticknap showed determination despite a rough start in his heat race that left him missing the Main Event by one position. In the LCQ, ‘The Seven Deuce Deuce’ had a good start within the top-10 and finished strong, climbing his way to a third-place finish. Although Enticknap finished in a disappointing position in the Main, he is optimistic to continue the momentum on Sunday.

The effects of Salt Lake City’s altitude kept Ryan Breece performing to his full capacity in his heat race but was able to preserve and finish in a solid fourth place in the LCQ. Unfortunately, Breece was forced to pull off the track during the Main due to altitude sickness. Breece is hopeful to recover and make strong strides during the next five rounds.

“This was a step in the right direction with successfully having all three [H.E.P.] riders in the premier main event,” said Dustin Pipes, H.E.P. Motorsports’ Team Manager. “Each rider had individual achievements that made me proud. It is a true testament to how well the team is progressing.”

JGR’s ‘Fast Freddie’ had just three days to recover from an injured ankle suffered at last Sunday’s Round 11, but still showed impressive speed on the challenging track layout. While running in a direct transfer position in the LCQ, Noren lost front wheel traction and crashed. Although he was quickly back on the bike and charging strong, he was unable to recover in spite of being the rider with the fastest lap time on the final lap.

“This was not the race day I had planned for,” said Noren. “But I know what kind of rider I am so I’ll learn, then let it go and come back swinging in a few days. I’m very thankful for the team and all of their hard work!”

Broc Tickle is recovering from an injured hand suffered at Round 11, and is eager to create some momentum on his RM-Z450 at Sunday’s race.

The JGRMX/ Yoshimura/ Suzuki team is also looking forward to the next 250 West round which will take place on Wednesday, June 10th where RM-Z250 rider Alex Martin will be ready to get on the track and add more championship points to his already top-five position.

The next gate drop happens on Sunday, June 7th at 5:00 PM EST when the Suzuki teams expect to put its RM-Z450s into top finishing spots.