Supercross mainstay works his way up the order to ninth place. 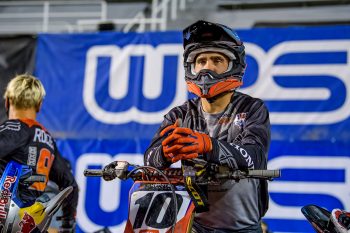 His end result was the same, but Justin Brayton’s ride to ninth position came in entirely different circumstances following a disastrous start to the 450SX main event at SLC2.

Brayton was at the rear of the pack through the first turn on Wednesday before mounting an inspired charge through to another top 10 finish.

It was a shot of confidence for the 36-year-old Team Honda HRC rider after his race went the opposite way just days earlier – starting up front and eventually fading back to that same result of P9. That was his first outing since recovering from a hand fracture suffered at Daytona.

“Another ninth place, but it was a totally different type of ninth place than on Sunday, when I started second and kind of made some mistakes and went back,” Brayton commented. “This time I got a really bad start and just got pinched off.

“I was in the second gate from the inside, which was kind of a gamble, but I chose it and it kind of bit me. I think I might’ve been last around the first turn and came back to ninth, so I felt good about the ride. I had really good lap times, especially the last 10 to 15 laps, so I just need to get a better start and I think we’ll be good to go here in four days.”

With Ken Roczen and Chase Sexton signed to Honda’s factory team for 2021, Brayton is yet to secure his future and a positive end to Monster Energy Supercross will be beneficial for him through negotiations that could see him race-on next year.

Brayton currently sits ninth in the 450SX championship, his best result of the year coming at Glendale when he finished sixth. So far, the four-time Australian champion has earned nine top 10s in 12 races this year.