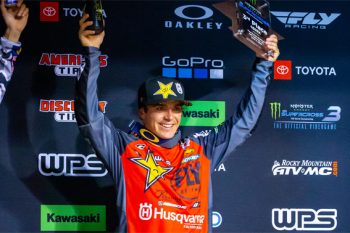 Just three days after the previous round, the 2020 AMA Supercross World Championship Series returned to racing on Wednesday with Round 12 taking place once again inside Rice-Eccles Stadium in Salt Lake City, Utah.

The Rockstar Energy Husqvarna Factory Racing Team had a stellar day all around as Zach Osborne led the 450SX charge with his first podium finish of the season, while teammate Jason Anderson finished close behind in fourth and Dean Wilson capped it off in sixth.

450SX
Anderson, the second-place qualifier, got a fourth-place start in 450SX Heat 1 and quickly moved into third. He charged his way up to the rear tire of the second-place rider, where he finished less than one-second back for third in the heat race. In the Main Event, Anderson grabbed a top-five start and worked his way up to third early on. He held a podium position through the first half of the race before dropping back to fourth for the remainder of the 27-lap Main Event.

“My day was not bad,” Anderson said. “I ended up second in practice and in the heat race I had a decent little battle and ended up third. In the Main Event, I got a good start and got tangled in the first corner. I came up to third for a minute and then fell back to fourth and just kind of rode around in fourth.”

Following a top-10 qualifying position, Osborne powered his way off the line in 450SX Heat 2, settling into third on the opening lap. He jumped into second early on and battled from there for a majority of the race, ultimately securing a third-place transfer. In the Main Event, Osborne shot off the line once again to capture the holeshot and early lead. He led the first 20 laps before engaging in a three-way battle for the top spot. With about five laps to go, he settled into third where he ultimately secured his first podium finish of the season.

“My Main Event ride was really good – I maybe let a win slip away but in the end it’s a good building block. I felt good all day, the team vibe was unreal and we had a really good, fun time today,” Osborne said. “To get all three of the bikes inside the top six was incredible. I’m really proud of what I accomplished and what the team accomplished tonight.”

Dean Wilson qualified fourth overall on the day, setting himself up for a positive night in Salt Lake City. He got off to a seventh-place start in 450SX Heat 1 and he slowly worked his way into a top-five position. He kept charging to ultimately secure a fourth-place finish behind his teammate, Anderson. In the Main Event, Wilson got a great start as he began the opening lap in fifth. He dropped back to seventh midway through the race and he fought hard to bring himself back up to sixth, where he matched his best finish of the season.

“Everything felt so much better today. I was in a really good mood all day, everyone on the team was just in a good vibe and the bike was awesome,” Wilson said. Qualifying went really good and I felt like I was riding really well all day. It was a demanding race and the elevation was definitely hitting me but I finished off with a sixth. I’m happy with that, it was a good fight.”

Jalek Swoll got off to a top-five start in 250SX East Heat 2 and he battled his way up to fourth just before the halfway point. After a hard-fought battle, he ultimately secured a fifth-place transfer spot. In the Main, Swoll got off to a good start in seventh and quickly charged his way into fifth by lap three. He kept charging all the way up to fourth where he continued to battle just outside the podium. On lap nine, Swoll got passed by the reigning champion and from there he diced back-and-forth to ultimately secure a seventh-place finish in the Main Event.

“I thought I turned the day around compared to how we started,” Swoll said. “I ran up there in fourth or fifth for a while and the rhythm took me out of the race a little bit but I feel good and I’m riding good so I’m just going to keep trekking through the next few races.”