Assorted racer comments following the 12th round of the season.

In Quotebook, a selection of riders detail round 12 of the 2020 Monster Energy Supercross, an FIM World Championship, at Salt Lake City. 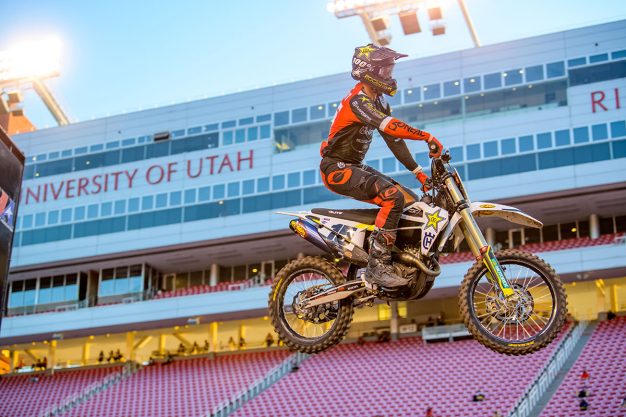 Cooper Webb (Red Bull KTM Factory Racing) – First:
It was a great night overall, but it was a tough race – the track conditions were definitely tricky and you had to be patient out there. The whoops were tough, I just committed to my lines from the beginning and it played out pretty well. It was a great night to get a win, these are not easily regained, especially with the top guys up here tonight so I want to soak it in but we’ve got five more rounds to go.

Jason Anderson (Rockstar Energy Husqvarna Factory Racing) – Fourth:
My day was not bad. I ended up second in practice and in the heat race I had a decent little battle and ended up third. In the main event, I got a good start and got tangled in the first corner. I came up to third for a minute and then fell back to fourth and just kind of rode around in fourth.

Zach Osborne (Rockstar Energy Husqvarna Factory Racing) – Third:
My main event ride was really good. I maybe let a win slip away, but in the end it’s a good building-block. I felt good all day, the team vibe was unreal and we had a really good, fun time today. To get all three of the bikes inside the top six was incredible. I’m really proud of what I accomplished and what the team accomplished tonight.

Dean Wilson (Rockstar Energy Husqvarna Factory Racing) – Sixth:
Everything felt so much better today. I was in a really good mood all day, everyone on the team was just in a good vibe and the bike was awesome. Qualifying went really good and I felt like I was riding really well all day. It was a demanding race and the elevation was definitely hitting me but I finished off with a sixth. I’m happy with that, it was a good fight.

Justin Barcia (Monster Energy Yamaha Factory Racing) – Eighth:
We definitely had better track conditions today, the traction was much better, but the whoops were very difficult. We made changes throughout the day searching for that happy setting. I got off to a pretty good start in the main event and was running well, but unfortunately got to the whoops and just couldn’t get through them all night. I’m proud of the team for making great changes today and it was a lot of hard work on everyone’s part. We’re just going to keep working and won’t be happy until we’re up front.

Aaron Plessinger (Monster Energy Yamaha Factory Racing) – 12th:
I struggled a lot throughout the day with setup. I didn’t qualify too well in the first session, I was just sliding around a lot and not really hitting the whoops like I wanted to. We got better in the second qualifying. I felt a lot better in that one and was flowing a little bit, but in the Heat race I got off to a bad start and fought my way to eighth. In the main event, I got an even worse start. I was messing around with some dudes in the back and couldn’t really get going until the halfway mark and worked my way up to 12th from 18th. It’s not where we want to be. We’re going to have to make some adjustments and get better starts and finish where we need to. I’ve got a good feeling about these next two rounds – I’m looking forward to it.

Eli Tomac (Monster Energy Kawasaki) – Second:
I was fighting with all I could tonight. I got pushed back off the start and began making my way towards the front after that. I got close with two laps to go but then I made a little mistake in the rhythm section so I couldn’t quite make it happen, but overall it was a good night for us.

Adam Cianciarulo (Monster Energy Kawasaki) – DNS:
Unfortunately, I had to make the tough decision of sitting this one out. I tried to ride the first couple practices but it’s just not in the cards for me today. It’s very frustrating and if I could ride I would. I’ve got to make the smart call now to rest and be ready for next Sunday, because we have a lot of good times ahead.

Ken Roczen (Team Honda HRC) – Fifth:
I’m feeling good on the bike and had a good heat race, but obviously I’m having issues that prevent me from keeping it going. I’m trying to figure it out and do my best to come back stronger. This thing isn’t over yet, but obviously fifth place is not where we want to be. The main goal is to try to be better and especially get a better start. I took a chance going to the very inside on the start gate and that didn’t work out. I’m going to rest and recover, and I look forward to trying our best in the next race.

Justin Brayton (Team Honda HRC) – Ninth:
So another ninth place, but it was a totally different type of ninth place than on Sunday, when I started second and kind of made some mistakes and went back. This time I got a really bad start and just got pinched off. I was in the second gate from the inside, which was kind of a gamble, but I chose it and it kind of bit me. I think I might’ve been last around the first turn and came back to ninth, so I felt good about the ride. I had really good lap times, especially the last 10 to 15 laps, so I just need to get a better start and I think we’ll be good to go here in four days. Shane McElrath (Monster Energy Star Yamaha Racing) – First:
Man, it was a great day for the team! It was a tough race. The track crew built a technical track and it was physically demanding, but I’m super-excited and thankful to do my best out there and tonight that was the top step. It’s cool to get back-to-back wins and I’m really excited about it, but right now my focus is on Sunday.

Colt Nichols (Monster Energy Star Yamaha Racing) – Second:
It was a really great night for the team, exactly what we needed to do. I wish I could’ve held the lead a little longer, but it was awesome to lead laps and be back on the podium after such a long break from racing. I had a blast during the night program. It felt like another day at the test track with Shane in that main event, so that made it really fun. I’m ready to go again Sunday.

Garrett Marchbanks (Monster Energy Pro Circuit Kawasaki) – Fifth:
My start in the main didn’t do me any favors trying to get up to the front. I was way back and had to manage to get through the pack. I’m thankful that we were able to get through pretty quickly, but the pace at the front is really high and if you’re not there at the start, it’s hard to close the gap. Everything else feels great, I just need to get up there so I can challenge those guys from the start. We get another try in a few days.

Jalek Swoll (Rockstar Energy Husqvarna Factory Racing) – Seventh:
I thought I turned the day around compared to how we started. I ran up there in fourth or fifth for a while and the rhythm took me out of the race a little bit but I feel good and I’m riding good so I’m just going to keep trekking through the next few races.