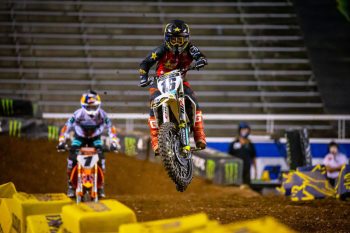 A near-win and podium result in Utah on Wednesday has Zach Osborne in favor of the unique fast-paced scheduled to complete the Monster Energy Supercross season.

All seven of the final rounds are currently taking place at Salt Lake City within a three-week period, which has proven suitable for Osborne so far.

“I wish we raced more and practiced less in normal times – maybe this whole thing can spark something like that in the future,” Osborne said. “I don’t know about other people, but I feel like for us as racers a lot of the hours and the hard stuff that’s done in the week doesn’t always show on weekends.

“Whereas, with this schedule, you don’t ride as much, there’s more racing and it just seems better to me. For sure, it’s benefited me a little bit right now because I typically recover pretty quick. We normally ride on Mondays and Tuesdays, so I’m typically a little bit off on Monday and I’m better on Tuesday.

“You know, we raced on Sunday here, so Wednesday was my normal Tuesday and I feel pretty good about it. This week I’m gonna ride a little bit tomorrow to keep things headed in the right direction and then I look forward to Sunday.”

Osborne rode to fifth in Sunday’s return to competition, carrying that momentum into Wednesday to improve by two places. Initially he was frustrated to lose the race, but satisfied to claim his first podium finish of the year.

“So far it’s been successful for me, for the most part,” he explained. “Leading the whole race ate me up a little bit at the end, but it is what it is, I’ll take a third and keep building this momentum that I have from Sunday.

“I didn’t get on the podium, but it was also a good ride for me. I feel really good with my bike at the moment, probably the best I’ve ever felt on hard-pack dirt in these sorts of conditions, so I think we’re kind of building some speed.”