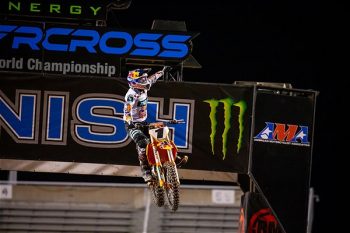 Webb qualified sixth overall in the combined sessions but he quickly changed the momentum as soon as racing commenced as he powered his KTM 450 SX-F FACTORY EDITION off the line in 450SX Heat 1 to capture the holeshot and early lead. He went on to lead the first seven laps before getting passed with two to go, ultimately securing a solid second-place transfer into the Main Event.

In the Main, Webb captured a second-place start and he patiently chipped away at the leader for the first 20 laps of the race. He made his move into the lead on lap 21 and from there he focused on minimizing the mistakes to maintain his lead through the checkered flag. Webb’s Round 12 victory marked the reigning champion’s second win of the 2020 season.

Webb: “It was a great night overall but it was a tough race – the track conditions were definitely tricky and you had to be patient out there. The whoops were tough, I just committed to my lines from the beginning and it played out pretty well. It was a great night to get a win, these are not easily regained, especially with the top guys up here tonight so I want to soak it in but we’ve got five more rounds to go.”

Coming off his best finish of the season at the last round, Troy Lee Designs/Red Bull KTM Factory Racing’s Pierce Brown got caught up with a downed rider early in the Main Event and was forced to come through the pack. He battled all the way up from 18th to ultimately capture a top-10 finish.