Wednesday 450SX winner on his second Supercross victory of the year.

Number one plate-holder Cooper Webb has had a good run so far on return to Monster Energy Supercross in Utah, finishing second on Sunday and then backing that result up with a win on Wednesday night at Rice-Eccles Stadium. Speaking via the post race press conference this afternoon, the Red Bull KTM rider recounts his night at SLC2, which sees him back to 29 points behind current leader Eli Tomac in the championship standings. 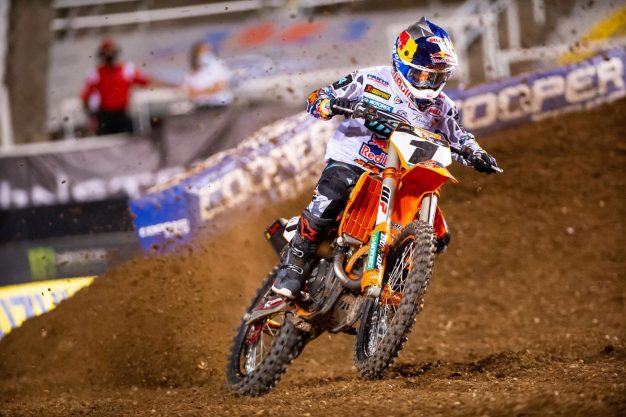 Late in the race, I couldn’t help but think of you and Zach, I’m assuming the hours you have ridden together and battled at the practice track. Was there someone of a comfort for you in that?

Yeah, it felt like another day in Florida, but on race-day. It was good, he had a great pace going and I kind of knew that the whole main event he’d put it all out there. I felt like that pace was really good, he was riding well and I saw that late in the race Eli was inching closer and closer, so I needed to make it happen. I was able to make the pass and I tried to kinda break away, but Eli got around him and really put the hammer down. Overall, it was a great race for me and to get my first race here in Salt Lake was great, so I’m looking to keep the ball rolling. It’s awesome whenever you can get a win, that’s for sure.

What was your routine between the races? People are wondering about the altitude and with the short break anything that you did differently and did it feel different racing on a Wednesday?

I quite enjoyed it, honestly. It was kind of strange… I didn’t ride dirt bikes or anything, I just went and played golf, did a little bit of cardio and stuff, so I enjoyed it showing up on race-day from a previous race-day. It’s kind of cool. It didn’t really feel like a Wednesday to me, it felt like a normal race-day, but looking back now, it’s Thursday and it does feel a little weird. It was a different program to what we’re used to with a lot of days in between, but I quite enjoyed the quick turnaround and yeah, it was nice.

After the win last night, do you feel like the layoff due to COVID was probably the best thing that could have happened for you after Dallas?

It was definitely a help. At that time I was struggling with the body, but I think the biggest thing was kind of being able to have that break to look back and realise maybe what I was doing wrong or what we need to be better at, stuff like that. Yeah, it was definitely a help, but at the same time I really enjoy those east coast races with the soft dirt and ruts. It’s been the opposite of that here so far, so I’m pretty stoked with how I’ve been able to adapt to this hard-pack stuff, for sure. 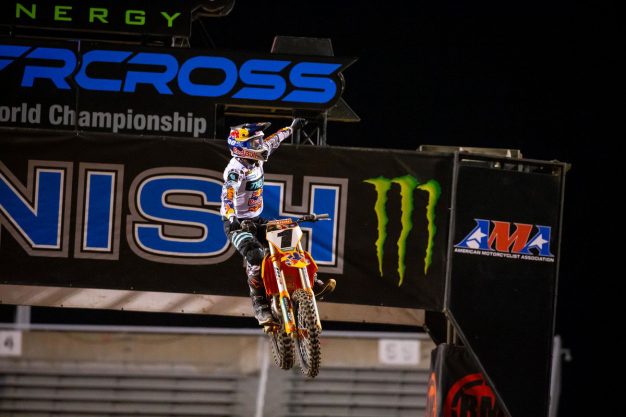 What was it like going back to the same stadium, but this time at night on a different track layout? How much different was that for you?

It was quite a change in schedules from being early to the latest one that I’ve ever raced. So, you know, it was definitely different like we’ve all said multiple times, but it was cool. I mean, it felt comfortable with how everything went and it seemed like this time around the routine was better with the mechanics and everybody because we knew what to expect. The track had more moisture this time, definitely a more technical layout and stuff like that, so I thought it was cool and I was stoked that they changed the track entirely. It was quite a bit different from last Sunday and they were able to do that in two days, which was pretty impressive. I thought they might leave the same layout or, you know, just change a few sections here and there, but it was cool that they did a full-on rebuild.

One of the most underrated parts of your game is your ability to chess-match when you and somebody else are a similar speed in the last five laps, you tend to always come out on top in those. Was your pass on Zach with three minutes left because you saw Eli coming or was it just an opportunity thing?

A little bit of both. I saw Eli coming and I knew I had to make a move to avoid him catching me. I felt like our pace was really good, but like I said, I could tell that Eli was catching us a little bit, a little bit, and I knew that he was going to be strong down the stretch, so I felt like I needed to get going. I tried a little earlier, maybe a few laps, but Zach really stepped it up for those laps and he kind of made that mistake in the whoops that gave me that opportunity. Racing is, especially with the long main events, it is a bit of a chess match because it is long. It’s one of those things where, depending on what position you’re in, you have to take what you’ve got and go with it. Like I said, I was obviously stoked with how I rode and the way I handled the race. Eli was really riding strong, so I had to hold it down and make it happen.