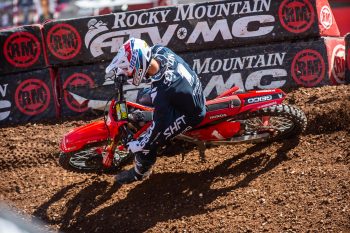 It actually happened. Monster Energy Supercross resumed after an 85-day layoff, with the first of a seven-race stretch of events run with social distancing rules at Rice-Eccles Stadium in Utah. The race took place during the day on a Sunday, and without fans, traditional opening ceremonies, and a nighttime show. Everything seemed a little odd, but the results didn’t change much, as 250SX East Region points leader and GEICO Honda rider Chase Sexton landed a runner-up finish to retain the red plate.

“It was crazy,” said Sexton. “To think Daytona was 85 days ago, it doesn’t feel like that long ago. It felt kind of like Tampa [the 2020 season opener] all over again. It was nice getting back racing. Like [others] said, it was kind of weird with no fans there. It was kind of hard to get yourself fired up and be in the mindset like this is for a championship race. This is for points. It kind of felt like a practice day. So I think getting my mind wrapped around that was the toughest thing.”

Sexton won his heat race. In the main event he once again faced stiff competition from Shane McElrath, who started slightly ahead of him and opened up a gap. Sexton would close at times, and then the duo hit piles of lapped traffic, which further changed the distance between them. Sexton closed up, but McElrath held on for the win, with Sexton settling for second.

“I felt like I rode decent,” said Sexton. “I think the lappers were gnarly for both Shane and I. Every time I felt like I’d gained some ground I’d just lose it the next corner. I just feel like that was on me. I feel like I had a win in my sights but didn’t make it happen.”

“Man it sure did feel good to be back at the races racing even though we still had to wear masks!” said Martin. “Great start in the main to put myself in a great position to be in the hunt for the win but my arms blew up after lap three. I went into survival mode to finish fourth.”

Rookie Jo Shimoda had the first bad race of his supercross career, getting into an early crash that broke his front brake and ended his day.

“Yeah, all day I had good starts and felt loose on the bike, just took a little time on one section,” said Shimoda. “Once I had that down I felt pretty good. I finished fourth in the heat race but DNFed the main event because of broken front brake.”

The races return quickly, with a Wednesday night event back in the same stadium.