Assorted racer comments following the 11th round of the season.

In Quotebook, a selection of riders detail round 11 of the 2020 Monster Energy Supercross, an FIM World Championship, at Salt Lake City. 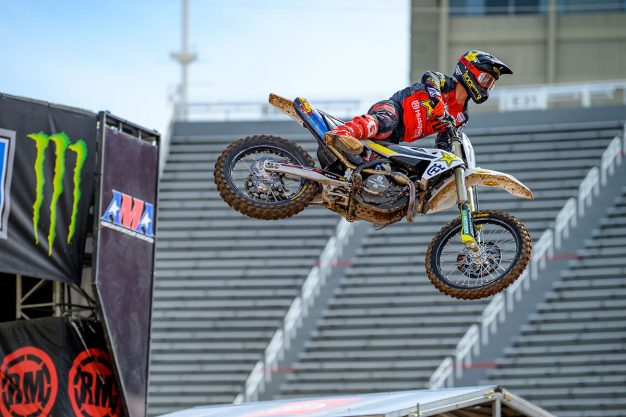 Cooper Webb (Red Bull KTM Factory Racing) – Second:
It’s good to be back racing, it’s awesome just to be able to do what we love. I was battling up there in the beginning – we were all sandwiched – and I was able to actually get around Eli, but then he went around us and really laid some good laps. During the middle of the race, I kind of lost speed a little bit and at the end I was really trying hard. I missed a rhythm at the end though and that really cost me in maybe catching him.

Jason Anderson (Rockstar Energy Husqvarna Factory Racing) – Fourth:
My day went pretty decent. I got a bad start in the Main and ended up fourth, but all in all I feel like I rode pretty well all day and was able to make some headway as we work our way into the next six rounds here in Salt Lake City.

Zach Osborne (Rockstar Energy Husqvarna Factory Racing) – Fifth:
It was a positive weekend overall. It was my first race back from injury, so it was really good for me to go out there and get comfortable in practice. I feel really comfortable on the dirt here in Salt Lake, which is something that’s not typically my forte, but it’s coming around for me. I’m happy with where I’m at fitness-wise and with my bike, so I’m looking forward to the next few races here – onwards and upwards.

Dean Wilson (Rockstar Energy Husqvarna Factory Racing) – 10th:
I’m not super-pumped with how the day went, but definitely taking a few positives from it including pole position in the first qualifier. I rode a bit tight in all my races and made some little mistakes that cost me. I didn’t get a great start in the Main so I was in the middle of the chaos, but I’m happy to get that one out of the way, bring home 10th and hopefully get better from here on out.

Justin Barcia (Monster Energy Yamaha Factory Racing) – Eighth:
It’s nice to get the first round out of the way. It definitely wasn’t how I wanted it to go. It was quite hot and being up here at altitude was definitely difficult. I had high expectations for myself coming into this round and kind of let myself down a bit. I think it’s all things that can be easily fixed and turned around for Wednesday. The main event didn’t get off to the greatest start and the first lap was chaos. Guys were falling down and then it was really windy and dusty. The track got down to concrete – it was a pretty gnarly track. All in all, we got out of the first one healthy and still have six more to go. I’m really looking forward to racing again Wednesday and I don’t have to wait another whole week to redeem myself.

Aaron Plessinger (Monster Energy Yamaha Factory Racing) – 12th:
It was no doubt a tough one for me. I was alright at the beginning of the day, but when the dry, slick conditions started coming out, I really started struggling. It was like riding on concrete with some rocks thrown in there. It’s something that I need to get used to by Wednesday for a good result. I’m going to go back and get some redemption at the next one. Thankfully, we don’t have that long to wait for it.

Eli Tomac (Monster Energy Kawasaki) – First:
Gosh, it felt so good to get back to racing. We really couldn’t have asked for a better day overall. The track was super-slick in certain areas and we were drifting the bikes through some of those flat corners, which was a lot of fun, but you had to be careful at the same time. I didn’t get the best jump off the start in the main, but was able to tuck inside and quickly recover. It was definitely a scary moment when Adam went down because I was already in the air and his bike bounced up and I had nowhere to go but up and over his bike. I’m glad he’s okay. Overall it was a good day and I am already looking forward to Wednesday.

Adam Cianciarulo (Monster Energy Kawasaki) – DNF:
Man, I am so frustrated with how today ended up. I cannot tell you how stoked I was to be back racing my KX450 with my whole Monster Energy Kawasaki crew. I felt good all day, rode solid in my heat race and got a great jump in the main event, I just made a small mistake that cost me big time. I’m pretty sore from getting ran over, but we’re going to let the body rest and take all the necessary steps so we are ready for Wednesday.

Ken Roczen (Team Honda HRC) – Second:
I felt pretty good. I had a decent start, but got bumped around a little bit and lost some positions, so we had to fight our way up there and were kind of just riding in a train – it was hard to make up time. I lost a couple of tenths and gained a couple of tenths here and there and then I kind of stayed the same. Obviously, Eli was super-strong and Cooper right in front of me, but I couldn’t really make a move. I had a moment with about a lap to go where I almost crashed really, really bad, and then the last lap I really just rolled everything pretty much just to kind of bring it home. A podium is okay. Obviously we need to put ourselves in front of Tomac, but there’s a lot of racing left and a lot of crashes out there. With all the lappers, a lot of things can happen. Really, we just have to regroup and try again on Wednesday.

Justin Brayton (Team Honda HRC) – Ninth:
It was a pretty good day. It felt so good to be back with the guys and the crew at the races and to get behind the gate again. Overall, I’m fairly happy with the day. The heat race was good, I got third there. I had a solid first half in the main and ran second for a long time. To be quite honest, I just pumped up about halfway in and kind of went backwards. Then I had a really big moment where I almost went down and that allowed a guy to get by me and some other guys to close the gap. I’m happy I didn’t hit the ground on that one, that’s for sure, and happy with a solid top 10 result. We’ve just got to keep this ball rolling, especially with the good starts that we got all day.

Broc Tickle (JGRMX Yoshimura Suzuki) – DNF:
I was really happy to be back at the races. I made it through three-quarters of the first practice and started putting the track together before I crashed. The bike flipped on top of me and it made contact with my right hand. I learned that I have a fracture in my right finger, so I am bummed but going to get some therapy and rest to get ready for next Sunday.

Fredrik Noren (JGRMX Yoshimura Suzuki) – DNF:
It was awesome to be back at the races again, and I’m so thankful for the whole JGR crew. Unfortunately, I tweaked my ankle and it was hurting pretty bad, so I decided to pull off. With some rest and ice, I should be good to go for Wednesday’s race. Shane McElrath (Monster Energy Star Yamaha Racing) – First:
There’s been a lot of anticipation to get back going and it’s finally here. I had a near-perfect day and I’m really happy with the progress we’ve made over the last few months since Daytona. My bike was awesome today and I felt great with the elevation. The track was honestly the best case scenario with the weather and wind that we dealt with today. I felt really good and I’m ready for another race in a few days.

Colt Nichols (Monster Energy Star Yamaha Racing) – 15th:
It was honestly a really fun day and I was just really happy to be at the races again, even with the results. We had some tough luck in the main with a crash and a lengthy mechanics area stop, but in the end I just have to get off the gate better. All in all, I’m really happy to be back racing and can’t wait to try again on Wednesday.

Garrett Marchbanks (Monster Energy Pro Circuit Kawasaki) – Third:
There was a lot that could have gone against us today with the track being so dry and still adjusting to the altitude and heat. And after so much downtime, it was hard to anticipate what to expect. With all those factors, we’ll take a podium, but that’s not where we want to be. I’m really glad we don’t have to wait very long to line-up again. We’ll be ready to improve on Wednesday.

Chase Sexton (Geico Honda) – Second:
It was crazy. To think Daytona was 85 days ago, it doesn’t feel like that long ago. It felt kind of like Tampa all over again – it was nice getting back racing. Like [others] said, it was kind of weird with no fans there. It was kind of hard to get yourself fired up and be in the mindset like this is for a championship race. This is for points, but it kind of felt like a practice day. So I think getting my mind wrapped around that was the toughest thing. I felt like I rode decent, the lappers were gnarly for both Shane and I. Every time I felt like I’d gained some ground, I’d just lose it the next corner. I just feel like that was on me – I had a win in my sights but didn’t make it happen.

Jeremy Martin (Geico Honda) – Fourth:
Man, it sure did feel good to be back at the races racing even though we still had to wear masks! Great start in the main to put myself in a great position to be in the hunt for the win, but my arms blew up after lap three. I went into survival mode to finish fourth.

Jo Shimoda (Geico Honda) – DNF:
Yeah, all day I had good starts and felt loose on the bike, just took a little time on one section. Once I had that down, I felt pretty good. I finished fourth in the heat race, but DNF’d the main event because of broken front brake.

Jalek Swoll (Rockstar Energy Husqvarna Factory Racing) – Seventh:
This was the best finish for me and that was the goal, to come back better than I was before the break in racing. Riding-wise, I actually felt good, I just missed a couple things on the track that cost me some time but if I polish those things up I’d be right up there with those guys.