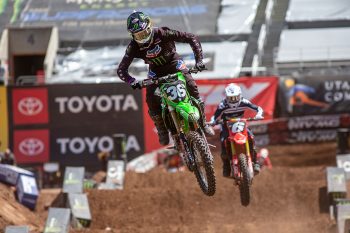 An aggressive move by Garrett Marchbanks on Jeremy Martin in the 250SX East final at Salt Lake City was just a matter of quickly getting by, according to the Kawasaki rider.

Marchbanks made the pass on lap four of the main event to earn third position on the podium, making heavy contact on the way through.

Questioned in the post-race press conference whether there had been a backstory, the Monster Energy Pro Circuit Kawasaki rider indicated that there had been no history between the pair. Martin later said that he’d suffered arm-pump from lap three.

“Not a payback at all, honestly,” Marchbanks said. “I just thought the track was really tough to pass on. I was just trying to make a quick, aggressive pass – that was all.”

Marchbanks claimed a first-career victory at Daytona directly prior to the COVID-19 crisis stopping the season, which limited his momentum leading into round 11. Still, he said it did help his confidence in the end.