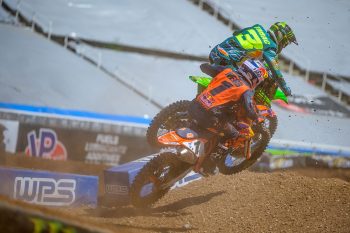 Webb climbed from sixth at the conclusion of lap one to P2 before halfway after passing Tomac, but the latter quickly countered on his way forward.

The Red Bull KTM rider managed to stay within reach until a late mistake proved costly on what was a relatively simple layout held in challenging conditions by the 450SX main event. His fastest lap came on the 19th of 29 laps.

“It was tough to find that balance of wanting to go faster and you try harder, but you make mistakes because it’s so dry,” he explained. “So it was really about being patient, but trying to carry the momentum and hit your marks.

“I felt like I made a charge there at the end – I made a mistake where I missed the rhythm that really kind of took me out of it a little bit. Overall, it was a long main event and once he got around me we played kind of cat and mouse.

“I was still a good ways back, but it seemed like one lap he would kind of gain and then the next maybe I would gain a little bit. I knew it was going to be a long one and I was just hoping to try to click off as many good laps as I could.

“Then at the end, that mistake, I think he got an even bigger gap with a few to go, so it was a hard charge, but definitely a long, long main event.”

Webb’s eighth podium of the 2020 season saw him remain third in the championship standings with six races to run, losing ground on red plate-holder Tomac and now 32 points in arrears.