Track conditions not expected to worsen for Roczen 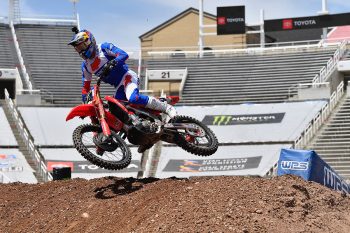 Monster Energy Supercross title challenger Ken Roczen isn’t expecting track conditions to ‘get worse’ over the next three weeks in Salt Lake City after high temperatures and wind made for a difficult race on Sunday.

All seven of the series’ final rounds will take place at Rice-Eccles Stadium with minimal modifications planned for the layout, but Wednesday’s event will be hosted in the evening rather than a being a daytime program.

Roczen qualified quickest following a late flying lap and then won his heat race in the sport’s return to competition, however, after completing the opening lap in eighth position, Roczen was unable to climb any higher than third place by race’s end.

“In general, you would think that if we’re racing on the same dirt six times in a row – same with Anaheim 1, Anaheim 2, Anaheim 3 that used to happen – it would just get worse and worse,” Roczen said. “I don’t think it can get worse than this, so the fact that we’re actually starting to race hopefully a little bit later in the day and at night, maybe keep some more moisture in it and turning the dirt around.

“It can’t get much worse, so I don’t really know what to expect. Hopefully it will just go the other way and get better, but who knows… The challenging side of things was just that the conditions were so tricky. The track in general was pretty basic and then the bikes being slower, so obviously it was a little bit tougher to make some of the jumps.”

“It’s obviously not ideal, but I’m not stressing by any means,” Roczen reflected post-race. “Even though we’re doing all these races in three weeks, there’s still a lot of racing to go – six rounds – so I think the team and I have got a good plan going.

“I left my bike the same as on sea level, so we have a couple little ideas I think just to give it a little bit more ‘oomph’ to make it easier with some of the rhythms and stuff, especially once we’re racing at night. Hopefully the traction will get a little bit better, things like that, so I’m okay with it.

“I’m just honestly glad to be on two wheels and be healthy after that little almost get-off. It wasn’t ideal, but I’m also not super-bummed and getting down on myself – it was really hard to make a big difference.

“Obviously, Eli was really good for what the conditions were and passing us. I made a mistake and he went by and I couldn’t really latch onto anything. Third place is not horrible, not awesome, but we have six more races to go to redeem ourselves.”