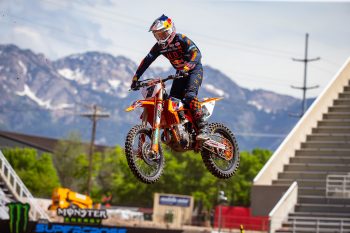 Cooper Webb and the Red Bull KTM Factory Racing Team made the highly-anticipated return to AMA Supercross racing on Sunday where the Reigning 450SX Champion secured a second-place podium finish in the first of seven “made-for-tv” races that are set to take place inside Salt Lake City’s Rice-Eccles Stadium over the next four weeks.

Webb, who currently sits third overall in the championship standings, remains within striking distance of a second consecutive title in what has proven to be a unique and historic situation for the 2020 AMA Supercross Championship.

Racing without the roar of fans inside the stadium, riders underwent a much different race day experience on Sunday with everything from the modified race times to drier-than-usual track conditions. Webb seemed to adjust quickly as he qualified fourth overall aboard the KTM 450 SX-F FACTORY EDITION before lining up in 450SX Heat 1. He got off to a second-place start in the heat race and he put in a solid ride to capture a second-place transfer into the Main Event.

In the Main, Webb got off to a sixth-place start and he quickly fought his way up to third early on. He bounced back-and-forth between second and third through the first half of the race before settling into second. He pushed hard to make a charge on the leader in the final laps but a mistake at the end of the race cost him some time and he ultimately finished 3.7 seconds behind the leader for second-place.

Webb: “It’s good to be back racing. It’s awesome just to be able to do what we love. I was battling up there in the beginning – we were all sandwiched – and I was able to actually get around Eli [Tomac] but then he went around us and really laid some good laps. During the middle of the race, I kind of lost speed a little bit and at the end I was really trying hard. I missed a rhythm at the end though, and that really cost me in maybe catching him.”