Salt Lake City 1 winner on a strange day to return to action.

Monster Energy Supercross is back and so is championship leader Eli Tomac. The Colorado native took one pivotal step closer toward a first 450SX crown by stamping his authority on the first of seven races in Utah, overcoming serious challenges from both defending champion Cooper Webb (Red Bull KTM) and Ken Roczen (Team Honda HRC), who finished in second and third positions, respectively. Post-race, a select group of media were able to join in on a virtual press conference via Zoom and here’s what Tomac had to say post-race. Eli, congratulations. For you, what was the biggest challenge throughout the day?

Our routine was different, right? Just the whole routine of the day and then not having the people in the stadium was a little bit weird. You had to tell yourself this is real. It’s so easy to get fired up for the main event and the night show and then when there’s no one there, so it kind of feels like practice. That’s what I had to really focus on – like ‘man, this really means something right now’.

It took you a little bit to get going too. Your first few laps were a little rough, but then you found that gear. Was that kind of just adapting to the race conditions again? Coming in maybe a little flat because of the energy?

Maybe a little bit and then trying to… I don’t know what I was really doing. I was a little bit slower after the finish line and then Cooper got the sling-shot on me. Then Ken made the next pass right there, so I don’t really know what the cause was early on. It was just maybe feeling out the conditions and those guys were just a little bit better early.

What were the final laps like there for you? Same situation with him three seconds back and the track going away.

It was just tough the whole time and the pressure was there the whole time – it was hard. Adam [Cianciarulo]’s thing was just crazy. I watched that again and the way his bike bounced, luckily the rear wheel was coming down and then I rode over the center of the bike. That was just pure luck to make it through that thing.

How similar is this dirt to what you ride on in Cortez and what does your week look like now?

Our track at home, it gets dry and hard, so it’s somewhat similar. This place has more rock in it. There was some marble, especially in that last turn before the finish-line. There was some serious marbly, rock coming up. It’s hard and dry at home. As for during the week, probably off the motorcycle, just because we only have two days. There’s really not much we can do, just recover. These race days are big efforts, so it’s just about recovery. 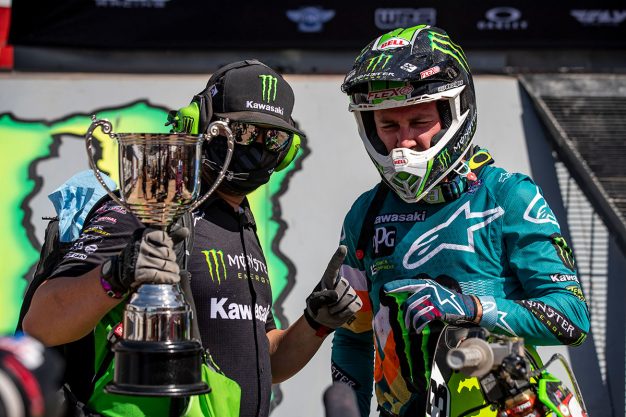 You already touched on it a little bit regarding Adam’s crash there. That was close for both you and Cooper, so can you kind of describe what happened there?

I’m not exactly sure what happened to Adam, but he got bucked a little bit forward and then he went sideways and slammed down and the bike popped up. That was the worst part was the wheel came up. I was already in the air, so there was nowhere to go. The way it just happened, it just fell down at the right time, right place and I rode over his bike. That was it – pretty sketchy.

We talked a little bit about the benefits of you having a background with racing in altitude or practicing at altitude. Do you feel like that really helped in this race?

I think early on it’s going to help us just for the general feel of the bike because they’re quite a bit slower up here. I know when I go to sea level the bikes are really fast, so when you come up here they definitely are slower. We’ve been able to practice a day or two up here, but I would think there’s some sort of advantage being a little bit used to it.

You previously were talking about just how quiet it was on the track before the races. What did you guys miss the most? Was it the sound of the crowds or the hype or the music beforehand? Was it just the pyrotechnics? Any of that kind of stuff?

I think it’s a little bit of everything. We kind of call it the ‘gladiator effect’ where you have the crowd and the people. That’s what we were missing – the lights, the noise, the music getting you fired up on that gate drop.

It seemed you were able to remain pretty composed towards the beginning of the race when Cooper and Ken made their way through. What was the mindset at that point?

At that point, I didn’t really know what was going on. I knew we had a lot of time left. I was still comfortable with that. I just wasn’t pushing as hard in general – I don’t think – early there. That was it, I was just banking on the amount of laps we had and no-one was really running away too fast too early, so I wasn’t totally panicking.