Supercross championship leader back on top at 11th round. 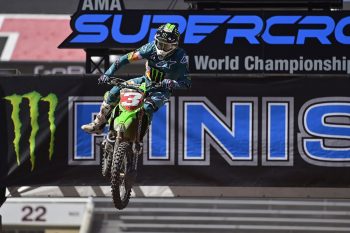 Tomac was all class in the 450SX main event, remaining patient in challenging, warm conditions to win by 3.771s over Cooper Webb (Red Bull KTM).

It was Blake Baggett (Team Rocky Mountain WPS KTM) led an action-packed first half of the race, before Tomac – who had to overcome both Webb and Ken Roczen (Team Honda HRC) in a scrap for position – ultimately made his way by.

Both Webb and Roczen soon followed, however, they weren’t able to mount another true challenge to Tomac from that point. Roczen saved a major mishap on the penultimate lap to salvage the final place on the podium.

The return to racing of Adam Cianciarulo (Monster Energy Kawasaki) was short-lived, going down heavily while in P2 on lap two. Both Tomac and Webb were momentarily caught up in the incident.

In addition, Chad Reed (Mountain Motorsports cbdMD CR22 KTM) was one of multiple riders to pit during the final, going out of the race but eventually credited with 19th.

Monster Energy Supercross will continue this Wednesday following a short turnaround, when Rice-Eccles Stadium plays host to round 12 of the 2020 season in Utah.