Former champion spends time back in New Mexico prior to restart. 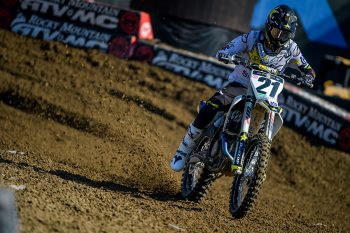 A three-week return to his original base in New Mexico has former Monster Energy Supercross champion Jason Anderson hopeful that he will be able to perform at altitude in Salt Lake City.

Anderson has experienced problems when racing at elevation in the past despite his upbringing, but an extended trip home could be enough to prepare him for the next three weeks.

The final seven rounds are all to be held in Utah at altitude, meaning a Therapeutic Use Exemption (TUE) that he’s indicated would traditionally be applied for won’t be a possibility during the month of June.

“Basically, I just went home to New Mexico and I’ve been there riding by myself for maybe three weeks,” Anderson explained. “Where our track is there is pretty high up, so I took it easy when I got there and feel pretty good right now.

“Usually I get some medicine that I’m able to take, but it’s only a TUE for three days to use it, so to be up here for seven rounds, I really had to go home. We built my supercross track up there and have been putting in some motos, so we’ll see how it works.”

It’s been a promising season to date in 2020 for the Rockstar Energy Husqvarna rider, ranked fifth in the 450SX standings with three podiums to his credit across the opening 10 rounds before the season was halted due to coronavirus.