Here we are, 11 weeks after the Monster Energy AMA Supercross season ground to an unexpected halt and on the verge of a fast and furious seven-round climax to what’s already been an enthralling series. From Sunday we’ll see the remaining rounds packed into just three weeks at Salt Lake City’s Rice-Eccles Stadium, providing us with a fascinating end to the 2020 championship. Under such unprecedented circumstances, there are a whole heap of questions that we want to see answered over the next few weeks. 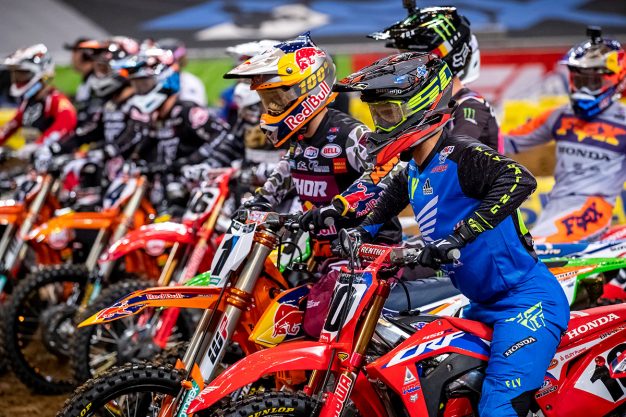 8. Adapting to changes:
No two ways about it, the restarted supercross championship we’re about to witness will be a vastly different beast to anything we’ve seen in the past. You won’t see crowds, mechanics areas, the usual podium celebrations, riders and teams socialising, or a variety of soil bases trucked in. The racers who can most effectively roll with the punches and adapt to the new format and restrictions will find themselves in a great position to capitalize. The short, frantic nature of these final rounds means those who can’t adapt will quickly find themselves playing catch-up.

7. Cooper Webb’s chances:
If there was ever a racer who seems to thrive in pressure-cooker situations, it’s Red Bull KTM’s Cooper Webb. The defending champion has proven he’s able to harness the pressure that others wither under and you’d have to think, that by that reasoning, the North Carolina native would be eager to pounce on the slightest error that Ken Roczen and Eli Tomac make. Webb is 29 points off the championship lead, so will need luck to go his way, but his seven podium appearances – including one win at San Diego – prove he can never be counted out.

6. Battle of 250SX West:
One of the most tantalising rivalries we’ve seen this year has been Monster Energy Star Yamaha Racing’s Dylan Ferrandis, his team-mate Justin Cooper, 16-year-old rookie Jett Lawrence (Geico Honda) and Monster Energy Pro Circuit Kawasaki’s Austin Forkner, who can barely be separated on a bad day. Sure, Lawrence is out of the championship picture after his spectacular crash while dicing with Ferrandis at A2, but the kid’s proven he has the speed to run with the best and will happily take the mantle of being a cat among the pigeons. Just 13 points separate Ferrandis, Cooper and Forkner, so the title is still anyone’s for the taking.

5. Track changes:
The promoter, Feld Motor Sports, has promised that we’re not going to see seven rounds of racing on the same track, which is great, but it remains to be seen just how much the track and layouts will change between rounds. We’d expect minor changes between the Sunday and Wednesday rounds, then more significant mods between Wednesday and Sunday when the track builders have another day up their sleeves. It’ll also be interesting to see if the track layouts and obstacles are generally toned down to ensure as many racers as possible get through this quick-fire end to the championship in one piece. 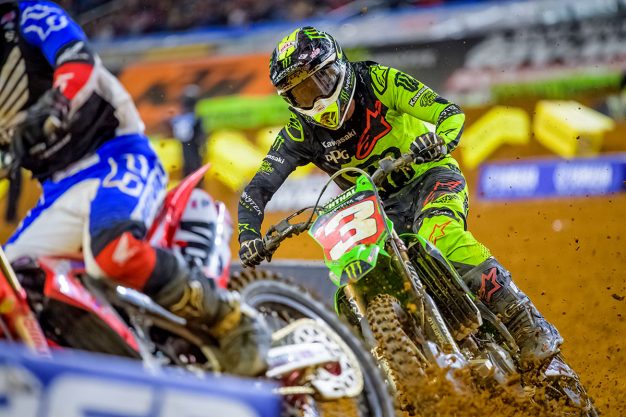 4. The intense schedule:
No matter which way you look at it, having two championship races every week is going to be tough on these guys. There’ll be little time to rest and recover between rounds. If you pick up a slight injury, it’s going to take some serious mettle to push through. We expect the final few races to take its toll and the fatigue to start setting in, but if nothing else, this new structure is going to put every rider’s fitness and recovery program under the microscope.

3. Recovered riders:
The 11-week break in the championship has given the likes of early championship front-runner Adam Cianciarulo (Monster Energy Kawasaki), Zach Osborne (Rockstar Energy Husqvarna Factory Racing), Justin Bogle (Rocky Mountain KTM) and series late-comer Broc Tickle (JGRMX Yoshimura Suzuki Factory Racing) – plus more – the chance to put their injuries behind them and be fired up for the rest of the championship. Like Jett Lawrence, as mentioned earlier, the prospects of a title are long gone, but they’ll all be relishing the chance to get back out there, and not just to fill the gates. The 450SX championship has stayed pretty stacked all season, but the re-introduction of these guys will make it even more-so and they’ll be fighting for podiums just as much as the next guy.

2. KTM switch of Chad Reed:
During the pause in proceedings, veteran Chad Reed has made the bold move to switch from Honda to KTM for the remaining seven rounds, meaning he’d have now officially represented every manufacturer throughout his incredible US career. 2020 is officially Reed’s swan-song year and while it hasn’t gone to plan – no question he would’ve liked to have visited each of the stadiums around the country that have held such rich memories of him – you can guarantee he’ll want to go out on a high, on his own terms. The prospect of race wins in such a packed field is slim, but there’s nothing he’d like more than to finish out his career with at least one podium performance.

1. Ken Roczen vs Eli Tomac:
Barring some sort of wild upset, the 2020 Supercross championship is boiling down to a two-rider race between Team Honda HRC’s Ken Roczen and Monster Energy Kawasaki’s Eli Tomac. After 10 rounds, just three points separate the two rivals and both have held the red plate for multiple rounds. The two contenders have both said they’re 100 percent prepared and we anticipate they’ll stop at nothing to win. On outright speed and aggression you’d pick Tomac, but on precision and style you’d side with Roczen. It sounds cliche, but this stare-down really is going to be decided by who blinks first.