After enjoying a promising Lucas Oil Pro Motocross season with flashes of brilliance last year, the off-season and early months of 2020 have been a frustrating affair for Geico Honda’s Hunter Lawrence. Not only has 20-year-old Australian had to work through knee and shoulder injuries, he’s also had to deal with his younger brother, Jett, getting faster than him while he watched on. MotoOnline chatted with Hunter as he prepares for the short, sharp end to Monster Energy Supercross and the upcoming outdoors. 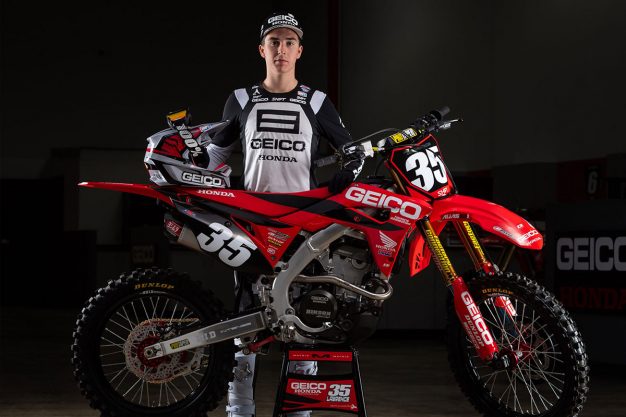 First of all, it’s been a pretty tough start to the year for you. How was the recovery from your shoulder and knee injuries?

The knee rehab and recovery went well, then to injure my shoulder during training before the Supercross season started was super-unfortunate, but we kicked its ass in the fastest time possible. The physio guy I saw works with a lot of top athletes in California and gave me two months to recover and be back on the bike. I was cleared by the doctors to ride two weeks ahead of schedule, which was pretty cool. When I’m injured I don’t take a holiday – I probably work harder than ever to keep my fitness up and not lose as much ground on the other guys who are fit and healthy. I’ve been back riding for two months and slowly getting faster.

I guess this whole coronavirus situation has played well into your hands, with it pushing out most of the year’s races so that you’re fit and healthy to race again.

Me and my trainer, Johnny O’Mara, were just talking about this and how much it’s screwed the world up, but it’s worked in our favor. It’s given me time to heal and still race some Supercross races. In every other aspect it’s been terrible and I hope no-one has to go through something like this again, but from my perspective it’s worked out well, for sure.

How have you stayed motivated during the past few months with the injury and dealing with the uncertainties of the postponed championships?

Long story short, Jett’s faster than me… We’re fortunate that we can train at Chad Reed’s old facility in Dade City and have that to ourselves. Jett and I train with Deano [Wilson], so it’s cool to chase them around. For the first time in my life I’m slower than Jett. He’s had seven months worth of Supercross practice and I’m four months behind him, so right now, an average lap for him is a fast lap for me. I can’t deny he’s on rails right now and one of the fastest Supercross racers in the world, so that’s keeping me really motivated. It’s also pretty cool riding with Deano, too. When he was young he used to train here with Chad and Byrner [Michael Byrne] and now the roles are reversed where he’s the old guy, while me and Jett are the young ones.

It’s a given that you’re on the starting gate for the final seven rounds of Supercross. Will the Geico Honda team stay in Utah the whole time?

Yeah, we’ll be here right through. Feld will test us right after we arrive and if we leave the state we have to be retested. Feld is jumping through a tonne of hoops with CDC and the Government of Utah to make this championship happen. It’s not just for our safety either – there are a lot of people who will be looking on to make sure we comply and if someone isn’t following the rules, they’ll get ripped to shreds. Mechanics all have to wear facemasks and aren’t allowed on the start gate with riders, and the talk is the only people allowed in the stadium are Feld staff, the Alpinestars medics, AMA officials, the TV broadcasters, a rider and his mechanic. 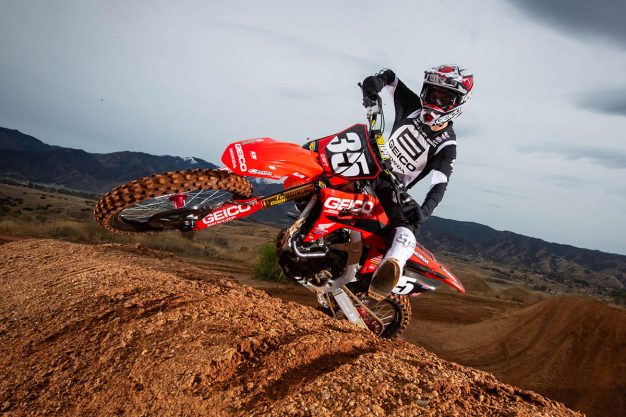 How’s it going to work between races? Are you all staying at a hotel, training in the gym and that sort of thing?

That’s what makes Utah easy. The team has found a property nearby with tracks and is looking to get machines in and build us a test track. The current plan is for the team to fly to California and get stuff, the bikes, training equipment and then drive to our Airbnb base in Utah. We could almost treat it as a holiday – we get to mountain-bike different places, ride different tracks and go racing, so I can’t wait.

Regardless of which coast you line up for, you’re coming into a championship halfway through. Even though you’re racing Supercross, is your main goal the Pro Motocross when it begins?

No, I commit to whatever events are in front of me, so I’m 100 per cent focused on Supercross right now and I’m not saving myself for the outdoors at all. Once the Supercross is done, we’ll focus on the Pro Motocross championship.

You turned a lot of heads outdoors last year. What’s your goal for 2020?

I’d love to be a podium guy every weekend and win that title. Everyone’s going for the same thing, but that’s the dream and what I want to achieve. If the real Hunter Lawrence turns up and lady luck is on my side for a change, I fully believe I can make that happen. Last year we struggled with a bike that was under-powered compared to some of the others in the field and it’s hard to come from outside the top 20 every moto on a bike that’s three to four horsepower down. Our competition is stepping up and we’ve brought in a new engine guy, Ryan Cox, who’s done a killer job so far. Our bikes are so much more competitive this year.

And how’s it been with Jett stealing the Lawrence limelight over the few months while you were out?

I won’t lie, it does suck [laughs]! It is what it is – he’s young, up-and-coming, got some great results and with that comes the hype. Our agent has done a great job of promoting him, but yeah, the goal is just to beat the little bro and put him in his place again.