Supercross confirmed for May restart in Salt Lake City

Rice-Eccles Stadium to host all remaining seven rounds in Utah. 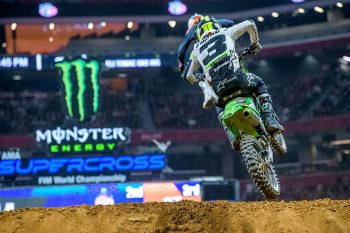 Monster Energy Supercross will officially resume on 31 May at Rice-Eccles Stadium in Salt Lake City, Utah, which will host the remaining seven rounds over a three-week period.

The ‘made for TV’ races will be broadcast on NBC networks and the Supercross Video Pass, staged with no fans in attendance due to COVID-19.

“We’re excited to continue our work with Feld Entertainment, Rice-Eccles Stadium at the University of Utah and the Utah Department of Health Services,” commented Jeff Robbins, president and CEO of Utah Sports Commission.

“Their continued support along with Utah’s Governor Gary R. Herbert, have made it possible for Supercross’ return to Utah. We also look forward to showcasing Utah worldwide via Supercross’ global footprint.”

The responsible return to racing will provide guidelines and protocols to competitors and essential staff that complies with all federal, state and local health guidance and mandates.

The racing format has been adjusted to reduce the number of athletes to stay within the minimum requirements and a standard race format will be used for all seven rounds, except for the finale which will be an Eastern/Western Regional 250SX Class Showdown.

The top 40 Riders based on current point-standings and 2020 top 100 number or combined season qualifying results will be permitted to compete. Two qualifying sessions, two heat races, LCQs and main events will be held across the 450SX and 250SX categories.

Events will alternate between Sundays and Wednesdays over the course of the remaining seven rounds. Rounds 11, 12, 13 and 16 will feature 250SX East, while rounds 14 and 15 will be 250SX West. The final round will be the 250SX Showdown.