Performances of the official 250SX West and 250SX East organizations.

With 10 rounds of 2020 Monster Energy Supercross complete and an indefinite break in the schedule before we commence the final seven stops, MotoOnline breaks down the 250SX performances of the official teams filling the gates of the West and East championships, rating their form to date. 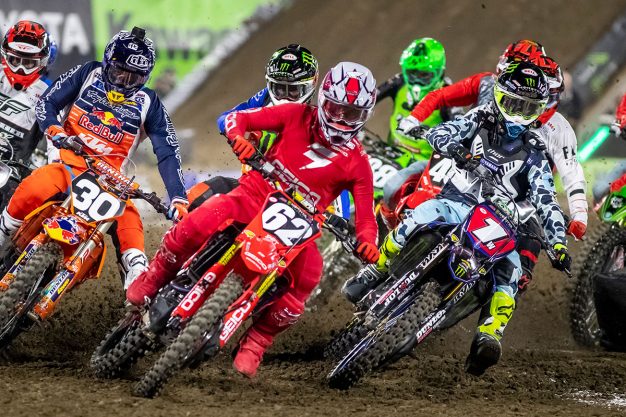 Team: Monster Energy Star Racing Yamaha
Riders: Dylan Ferrandis (W), Justin Cooper (W), Shane McElrath (E)
Rating: A
Rundown: Across two championships, you can’t ask for a much better performance than the emphatic performance that the Monster Energy Star Racing Yamaha team is putting on at the moment. With defending 250SX West champion Dylan Ferrandis leading the championship from teammate Justin Cooper and new recruit Shane McElrath holding down second overall on in 250SX East, the team is flying high, even if they’ve all had to work hard for their positions against some extremely stiff competition. Their win record of five victories from a total of 10 races proves they’re the most dominant outfit in the pits.

Team: Monster Energy Pro Circuit Kawasaki
Riders: Austin Forkner (W), Cameron McAdoo (W), Garrett Marchbanks (E), Jordon Smith (E)
Rating: B
Rundown: With newcomer Jordon Smith expected to vie hard for the 250SX East championship and Austin Forkner switching to 250SX West this year, the Monster Energy Pro Circuit Kawasaki team had high expectations of clinching one, if not both, titles in 2020. While Forkner has been staggeringly fast and has won two mains, a big crash in the whoops at Anaheim 2 has put a big dent in his title hopes and he sits third overall. His teammate Cameron McAdoo had a horror qualifying crash at St. Louis that resulted in a collapsed lung, which put him out for a number of races. Out east, Garrett Marchbanks broke through for his maiden main event win at Daytona to leap up the standings to fourth, while Smith struggled to find form with his new team and injured his ACL at Daytona, putting him out for the season.

Team: Geico Honda
Riders: Jett Lawrence (W), Christian Craig (W), Chase Sexton (E), Jeremy Martin (E), Jo Shimoda (E)
Rating: B+
Rundown: It’s a tale of two coasts for the Geico Honda squad. On the east coast everything they touch turns to gold, as not only is Chase Sexton leading the championship and looking like the title favorite, his teammates Jeremy Martin and Jo Shimoda are sitting fifth and sixth respectively with some standout performances. On the west, though, it’s a vastly different story. Both of their pilots, Jett Lawrence (collarbone) and Christian Craig (broken hand), have missed rounds due to injury, but will be back behind the gate when the series resumes. For now, Lawrence is sitting 15th and Craig 19th, so both will be racing for pride when they return. 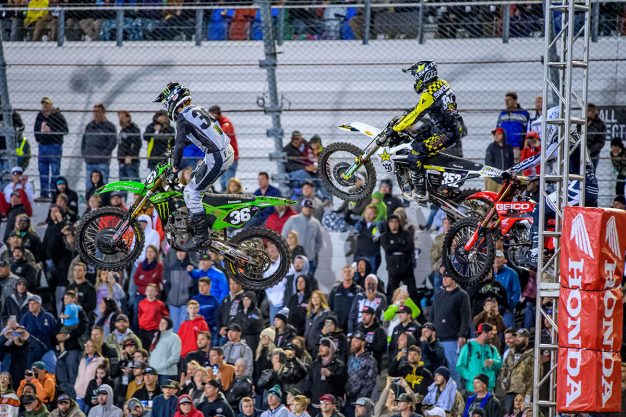 Team: Troy Lee Designs Red Bull KTM
Riders: Brandon Hartranft (W), Derek Drake (W), Pierce Brown (E), Brian Moreau (E)
Rating: B-
Rundown: After losing their heavy-hitters at the end of 2019, this season was expected to be a rebuilding year for the TLD Red Bull KTM team, as they brought in Brandon Hartranft and a trio of young racers, Derek Drake, Pierce Brown and Brian Moreau. For the most part, the move has paid dividends. Hartranft is sitting fourth in 250SX West, with Drake ninth (earning three top 10 finishes to his name), while on the east, Brown’s debut was delayed until Atlanta where he led most of his first heat race, then placed sixth at Daytona. The only dark mark for the team was the serious injury to French teenager Moreau, who broke his back during practice at Tampa and is now recovering back home.

Team: Rockstar Energy Husqvarna Factory Racing
Riders: Michael Mosiman (W), RJ Hampshire (E), Jalek Swoll (E)
Rating: B
Rundown: 2020 has proved to be a pretty decent year so far for the Rockstar Energy Husqvarna squad. On the west coast, Michael Mosiman has shown plenty of promise with four top four placings out of six rounds, but has also experienced some big crashes at Oakland and St. Louis. His current eighth-place standing doesn’t tell how good he’s been and if he can keep it on two wheels for the remaining rounds, his standings should improve. Meanwhile, new recruit RJ Hampshire proved to gel well with the new bike and was sitting third in the 250SX East points, but with the series return up in the air, he’s taken the gamble to undergo a knee reconstruction. That will likely leave rookie Jalek Swoll to fly the team’s flag on the east coast if the series resumes in the coming weeks as anticipated. He’s currently 10th with a string of consistent ninth-place results.

Team: JGRMX Yoshimura Suzuki Factory Racing
Riders: Alex Martin (W), Jimmy Decotis (E)
Rating: B-
Rundown: The JGR Yoshimura Suzuki team will no doubt be making the most this unscheduled calendar break to get their campaign back on track. On the west coast, Alex Martin has enjoyed a pretty consistent series and currently sits fifth in the championship hunt, so there’s certainly nothing to complain about there. In 250SX East though, Jimmy Decotis is holding down 15th overall and is clearly not at his best after fracturing his pelvis just days out from round one. He crashed hard and didn’t score any points at Arlington, then opted to sit out Daytona after qualifying, citing extreme fatigue and anxiety. Hopefully this hiatus will be just what Jimmy needs to rebound.