Added main event wins the target for Barcia upon return 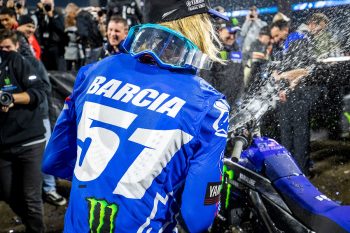 Anaheim 1 winner Justin Barcia has a clear goal set for when Monster Energy Supercross resumes – to add to his win tally for season 2020.

The Monster Energy Yamaha rider made a rapid start to the year by standing atop the podium at A1, then finishing twice on two occasions since then.

Ranked fourth in the 450SX championship standings following Daytona and during the current pause in the series due to the coronavirus pandemic, Barcia would be satisfied if he can find the form for more wins – and multiple podiums – across the final seven races.

“At Daytona I was not happy with how I rode, how I felt and my finish – fifth place is not where I want to be,” reflected Barcia. “Whenever we get back to Supercross, I definitely want to be on the podium and get a few more wins. That would definitely be a happy season for me.

“With the points, we’ll see where we end up, how it goes, how the other guys have races and things like that – there’s so much that can happen. I’ll definitely be happy with another race win or two and being on the podium a lot.”

An official return to racing is yet to be confirmed by Feld Motor Sports, with recent rumours suggesting the gates could drop as soon as next month in Glendale, Arizona, where each of the remaining rounds would be held. Otherwise, the series would likely restart in the fall following Lucas Oil Pro Motocross.