JGRMX Yoshimura Suzuki fill-in on his return to the sport.

After missing two years of racing due to a failed anti-doping test, 30-year-old Broc Tickle was given a golden ticket when he received a call-up to the JGRMX Yoshimura Suzuki Factory Racing team for his comeback ride in 2020 Monster Energy Supercross at Tampa, finishing 12th in the 450SX main event. However, his return was short-lived after he crashed out at Arlington’s following round with a broken hand. It seemed a cruel blow, but the always-optimistic Tickle hasn’t let it faze him. In fact, this whole coronavirus lock-down situation has worked in his favor and we caught up with Tickle to find out how he’s traveling. 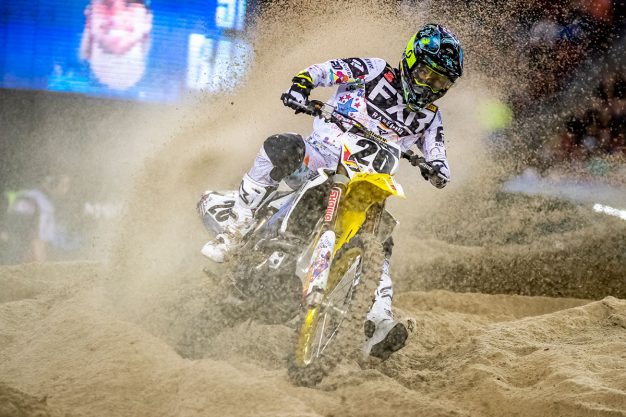 Broc, after two years on the sidelines, how did it feel to finally be back out on the track at Tampa?

It was just awesome. I was a bit nervous, but I knew what to expect and kinda wanted to ride the line between enjoying my first race back and putting down a good base to build from. I really wanted to enjoy every second of it. The positivity from the fans in the pits, the media, the industry and riders, man, everyone was positive and not one bad thing was said to me. It was really encouraging after everything I’ve been through.

What were your expectations going into Tampa from a results perspective?

My aim was to get top 12 and I did that, but as racer, I think if I could’ve been a tiny bit more prepared on the Suzuki and a little bit better technique-wise, I could’ve really crushed that 12th-place finish. I’m not saying I would’ve been second or anything, but I think I could’ve been in the mix for 4-7 rather than 7-12. The main was just chaos and that tired me out, but I did expect that as I haven’t raced at that intensity in ages.

So I’m taking it you were happy with the result, but as a racer you always want more.

For sure. I did press day to help break the nerves and then the goal was just to focus on the moment, soak it up and enjoy it. Even going into the stadium on press day, I had this sense of ‘I’m back and this is awesome’. Through my suspension there were times I questioned whether racing is still what I wanted to do, as there was so much uncertainty in my case with timing and a lack of communication. There were so many variables, but once I knew my return date, I knew straight away where I wanted to be. It was a great feeling not having to second-guess my direction in life.

Then as we all know, you crashed out at the next round at Arlington with a broken hand. What happened from your perspective?

Coming in I felt like I was in a good position to keep building, some of the other guys in the 450s were kinda settling in and I was wanting to ramp up, so I felt like I was in a perfect place to improve. The crash happened in the first race of the Triple Crown and I was mid-pack off the start, so it was pretty chaotic. In the first rhythm lane before the whoops, me and another rider were doing opposite jumps and he kept moving right and I ran out of space. He made contact with my hand and I knew right away something wasn’t right. I dropped my bike and walked to medical with pain in my fingers from the trauma spreading out. Basically I had a boxer’s fracture – I broke the metacarpals of my pinky and ring finger, but it was a clean break and I didn’t need any surgery, thankfully. Then this whole coronavirus lockdown happened, so it gave me optimal time to recover and I’m back to 100 per cent now. I might’ve rushed a return otherwise, so it definitely worked in my favor. What were your thoughts when that crash happened? I can tell you from the outside everyone was just like, ‘you’ve got to be kidding me!’

[Laughs] You know, I didn’t look at it negatively at all. I told myself I’d gone through way worse and this was just a bump in the road. It wasn’t the wall I’ve been dealt with the past two years, that’s for sure. My goal was to get back to racing as fast as possible, but now we’re all in limbo – all the tracks in California are shut down now and we’re about to turn to hot weather. At the moment I’m staying motivated by training a couple of young talented amateur guys and enjoying that a lot. I’m also doing my own training, but I don’t have a bike at the moment as Suzuki and the JGRMX race team in Charlotte are currently locked down as well. I really want to get back on the bike and start riding again – as the schedule currently sits we’re racing on June 20 at High Point, so that’ll be the first race back.

Was your deal with JGRMX a Supercross-only deal or did it cover outdoors as well?

The written and signed part of the deal was to race 10 rounds of supercross, so as of now I still have a spot, a bike and parts. Obviously we’ll need to see a released schedule before anything’s confirmed for outdoors, but the original verbal agreement for that series was for them to supply a bike and parts and I would be underneath the Pirelli rig, and maybe under the JGR semi, but we need to work all the terms out for that. Once we know the schedule we’ll be able to move forward and I’ll be in a good spot to soak up the comeback for more than one race.

I know there’s been a bit of talk lately that we could see some Supercross races from as early as next month, but what’s your gut feeling of what the schedule will look like?

Honestly, I don’t think the situation has settled down enough for that and we’ll race outdoors first and come back to Supercross. In a perfect world it’d be best for the sport if we completed the Supercross championship first so the guys are crowned champion, otherwise you’ve got the likes of Chase Sexton who’ll be stepping up to a 450 for outdoors then have to go back to a 250 for the rest of the Supercross championship. That would be pretty unfair and I think people will view the split season negatively. Obviously the promoters will abide by the law, but I’m just excited to get back racing. I have faith and believe I could be as good, or better, than I was before the suspension.

Away from racing, how has the current coronavirus situation affected you personally?

I used to get up around 6:00-6:30am, but I’ve pushed that back to 7:30-8:30am now. I then either train the two young guys I’m helping for a couple of hours or training myself, then from 2:00pm onwards I’m pretty free. I’ve been cooking a lot at home and experimenting with different things on my Traeger grill and I’m about to convert my garage into a gym with everything I need. Me, Jake Weimer and few of the ‘30-plus club’ guys have been playing Supercross 3 on the PlayStation in the evenings and that’s been cool as well. I’m just trying to stay positive and motivated to keep prepared for when the time comes to race again.